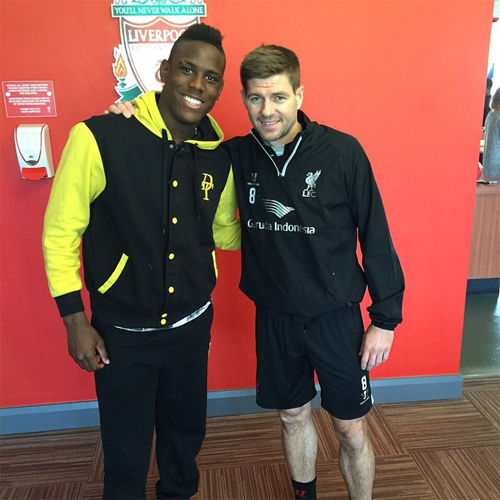 Mario Balotelli orchestrated a snap of his brother and Liverpool captain Steven Gerrard at Melwood on Thursday.

The Reds skipper is set to quit the Anfield club after a decorated 18-year career at the five-time European champions.

So Balotelli made sure his brother, Enoch, managed to get a snap with one of Liverpool’s greatest players of all-time before his stateside switch.

Balotelli posted the above photo and tagged his two pals: “@enock17 @stevengerrard”

The Italy international made rare back-to-back Premier League starts against West Bromwich Albion and Hull City over the past week.

However, the former Inter Milan striker was unable to fire Liverpool to victory in either of their Premier League outings.

The 24-year-old striker has scored just four goals in all competitions for the 18-time English champions this season.

Balotelli, who won the Premier League title with Manchester City in 2012, joined Liverpool in a £16m deal from AC Milan last summer.