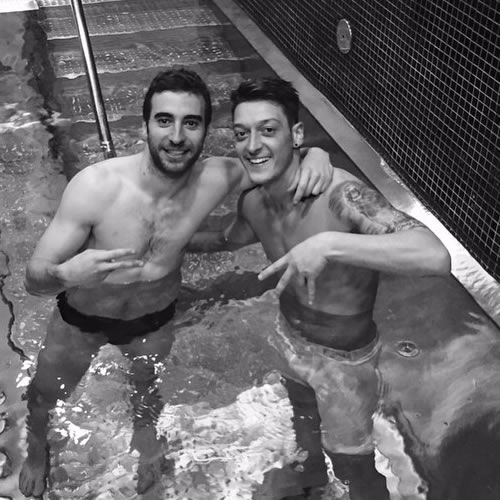 Mesut Ozil took to social media on Saturday night to wish all of his followers a great weekend after helping Arsenal to a thumping 4-1 win over Liverpool.

Ozil scored Arsenal’s second goal with a sublime free-kick as Arsene Wenger’s man ran riot in north London and secured victory to move up to second place in the Premier League table.

And the Germany international posted the picture above of himself with Mathieu Flamini after the game and wrote: “I wish everyone a wonderful weekend. #ozil#happy#gn8”

Arsenal went ahead in the 37th minute in north London when Hector Bellerin curled a left-footed shot low into the far post.

Ozil then made it 2-0 with a sublime free-kick just two minutes later, before Alexis Sanchez drilled home on the stroke of half-time.

Jordan Henderson pulled a goal back from the penalty spot in the second half but Olivier Giroud’s stunning turn and shot added gloss to the scoreline after Emre Can was shown a second yellow card.