Some of Arsenal's stars enjoyed a paintballing session this week 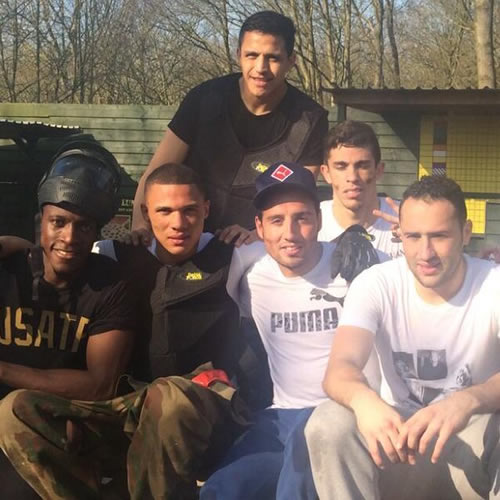 Alexis Sanchez and Santi Cazorla were among the Arsenal players to take part in a paintballing session this week following the Gunners’ impressive recent form.

The north London side moved up to second place in the Premier League table thanks to a thumping 4-1 win over Liverpool at Anfield on Saturday s the Arsene Wenger’s men continued their fine form.

And some of the Gunners squad enjoyed a well-earned break this week by taking part in a paintballing session.

Gibbs posted the picture above of the Arsenal stars on his Twitter account and wrote: “Got absolutely lit up at Paintballing”.

Arsenal take on Burnley at Turf Moor in their next Premier League game on Saturday afternoon.

The north London side have won nine of their last 10 top-flight games and are currently seven points behind leaders Chelsea heading into the final seven games of the season.