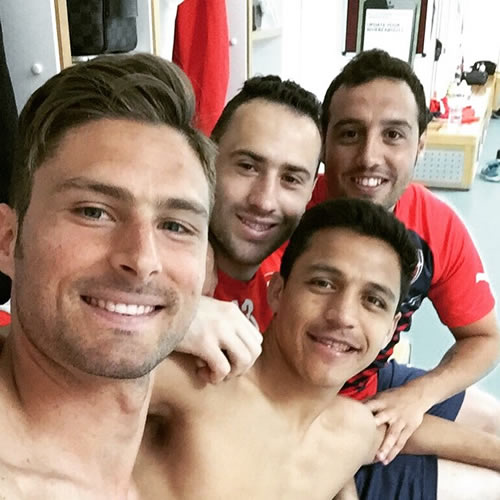 Olivier Giroud, Alexis Sanchez, David Ospina and Santi Cazorla all looked in good spirits as they posed for a selfie after Arsenal’s goalless draw with Chelsea on Sunday.

The Gunners were held by Jose Mourinho’s men at Emirates Stadium as the Blues earned a point to take them a step closer towards winning their first top-flight title since 2010.

The Arsenal stars looked to be happy enough with a point as Arsene Wenger’s men look to secure automatic qualification for the group stage of next season’s Champions League.

Goalkeeper Ospina posted the picture above on his Instagram account and wrote: “Good point today.. Tough match but we continue to fight #afc”

Sunday’s stalemate left Arsenal third in the Premier League table heading into the final five games of the season. They are currently 10 points behind Chelsea and level with Manchester City, who have played a game more.

Their next game is a trip to Hull City in the Premier League on Monday 4 May.

Arsenal have a lot to look forward to, declares Ian Wright