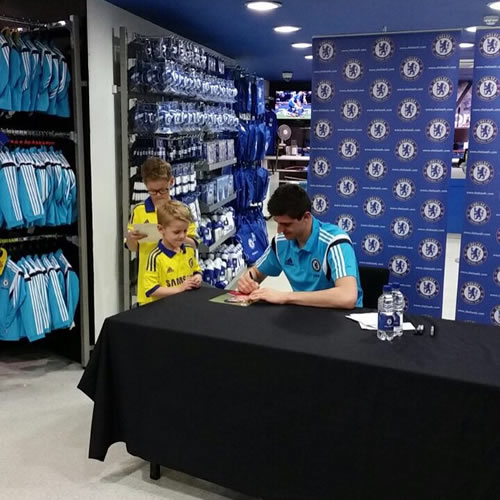 Thibaut Courtois took some time away from the intensity of Chelsea’s Premier League title bid on Wednesday as he took part in a signing session with fans at Stamford Bridge.

Courtois played the full 90 minutes and was helpless to prevent Charlie Adam’s stunning equaliser as Chelsea ran out 2-1 winners over Stoke City in west London on Saturday afternoon.

And the goalkeeper was clearly pleased to spend some time with some lucky Blues supporters this week.

The Belgium international uploaded the photo above onto his Instagram account and wrote: “Great to see all the fans today at Stamford Bridge! #CFC”

Courtois will be expecting to feature when Chelsea take on Queens Park Rangers at Loftus Road on Sunday afternoon in their next Premier League game.

The 22-year-old has featured in 26 of Chelsea’s Premier League games this season since his return from his loan spell at Atletico Madrid.