So long has Rafael Nadal now dominated clay, it is hard to recall just how completely he broke the mould 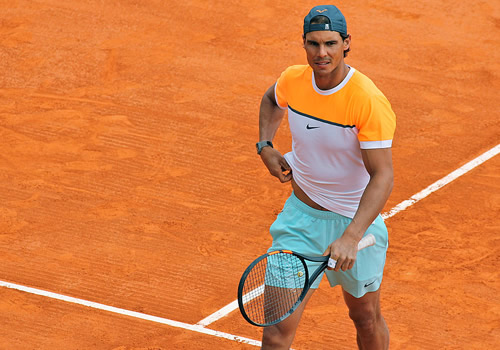 Whichever way you look at it, wherever the rectangle of terracotta dust, however the wind blows, Rafael Nadal is at his best, and his happiest, when his feet hit the red stuff.

It was ever thus since he won his first title in 2004, which itself was merely an overture to his 11 titles from 12 finals in 2005, among them his first trophies in Monte Carlo, Barcelona, Rome and the French Open. That marked 24 straight match-wins on clay to claim two Masters and a Grand Slam, and Nadal was still a teenager.

So long has Nadal now dominated clay—and excelled on all other surfaces, too, come to that—it is hard to recall just how completely he broke the mould. His punishing, physical game, which reinvented the top-spin forehand into a plunging lasso of a shot, was just part of the appeal. His piratical image boasting sleeveless vest, long pants, and drenched hair bound with a knotted bandana, appealed to a whole new young audience. He was exciting, intense and cut a swathe through the very best—including the man atop the tennis world, Roger Federer—whenever it came to clay.

Last year, though, for the first time in many a year, there were signs of a chink in Nadal’s armour. In Monte Carlo in 2013, an eight-title, 44-1 run had come to an end against Novak Djokovic in the final. Then here last year, he was beaten on clay for the first time in a decade by David Ferrer in the quarters.

In Barcelona, where Nadal is also an eight-time champion, he last year lost in the quarters for the first time to Nicolas Almagro. At the Rome Masters, where he is a seven-time champion, he lost out for the second time in the Eternal City to Djokovic in the final. He did win the 2014 Madrid crown, but the victory came after his opponent, Kei Nishikori, retired having won the first set.

Come the French Open, though, Nadal steadied the ship to increase his run there to 66-1. He beat Djokovic, but this year, there is no doubting the mighty Serb is determined to turn the tables and claim the only Grand Slam missing from his resume. And as chance would have it, Djokovic has begun the clay swing by usurping Nadal’s sixth place in list of weeks spent at No1. 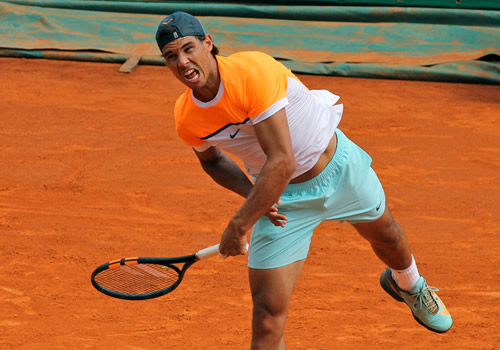 But it is not just Nadal’s less-than-perfect run on clay last year that may give Djokovic cause for optimism. After six months of injury and illness at the end of 2014, Nadal has yet to regain his full powers, yet to beat a top-10 opponent, yet to really reclaim his self-belief. He went so far as to admit, after losing his second match in Miami, that he felt ‘anxious’ and ‘nervous’.

So it was no surprise when many of the questions posed to the quietly-spoken, calm-mannered Spaniard by the media in Monte-Carlo were about confidence, about stress, about how he felt now that he was back in the environment he so loves.

He broke into a broad smile: “I am always well in Monte-Carlo, I love being here! I am practising well. I hope to be ready… It’s a good feeling being back playing my favourite part of the season. I know I have to play better than I did, but I try my best.”

But did he believe he could reclaim the Monaco title?

“If I don’t believe I can do it, I would not be here… If I am here, it’s because I have motivation and passion to keep playing tennis, and that means trying to be competitive for everything.

“The most important thing is to feel well on court again, feel confident, feel that I am improving, and I was improving every week before Miami. In Miami I played bad. So I need to be back to that improvement line.”

But asked about the pressure of being the man in everyone’s sights when it comes to clay, he shrugged in his own inimitable style:

“I don’t have pressure this year. I am not favourite for anything. I have played worse than the rest of the rivals of mine. I arrive with the motivation to do better than I’ve been doing, and that’s it. It is motivation [I feel] more than pressure.”

Nadal, of course, has never been one to blow his own trumpet—though it is obvious he could not have achieved what he has without a blazing competitive fire, and a work ethic and determination to match. But now, even more than usual, he was keen to underplay his immediate prospects, keen to deflect expectations, yet anxious to stress that he is going nowhere anytime soon.

“Experience says it’s just small things that make big changes, and I know if you are working well, you have the motivation, you are passionate with calm, the moment can arrive. I am ready for the bad things but I’m ready for the good things if they happen.”

“Mentally, I am well, it’s not that I have a bad attitude… [but I] need to play with a little more calm and confidence. [Smiling] I don’t think I forget how to play tennis.”

Certainly his rivals have no doubt that Nadal will again soon hit his formidable stride. Djokovic, who has drawn Nadal into his half of the Monte-Carlo draw, was acutely aware of the challenge ahead if he is to fulfil his own French Open ambitions.

“At the end of the day you are talking about somebody that has won so much in his life, has the experience, the talent, potential, the strength, mental and physical, the complete player, one of the best who has ever to play the game. So I wouldn’t worry too much about it. Everyone has those periods—I went through those periods… We are human and we go through stages where you lose a match and doubt yourself. It’s important to reflect on it, identify the problem, work on it, and get stronger. And he has proven that so many times. It is one of his virtues.”

Nadal, for his part, turned reflective, sounding for all the world like the words that greet players on their way to Wimbledon’s Centre Court.

“Tennis is a sport of victories: The losers, the defeats… nobody remembers that. When I lose, I lose, that’s it. I am not destroyed for a week. You have to be ready to accept everything that can happen. During my career I have been ready to accept both things with calm—the victories with calm, the losses with calm. I’ve tried not to consider myself too good when I was winning a lot, nor consider myself very bad when I was losing more. Is a line that stays there in terms of being a human person rather than a tennis player.

“Most important thing is be relaxed, appreciate all the things that happened to me, and be grateful for all the luck I am having and enjoy all this.”

It could have sounded like a valediction, except that anyone who has watched this warrior on a tennis court and listened to his passion off it, knows he will keep coming back for more for as long as he is able:

“Ten years is a long time, and the only negative in general is there remain less years that I am here playing. For the rest, even with injuries, it’s a dream career. If I started again, I would not repeat what I did, I think. All the things I did on this surface are just amazing.”

That’s about as close as Nadal comes to a boast—and whether or not he goes on to win a staggering 10th French Open title, the self-effacement will endure.