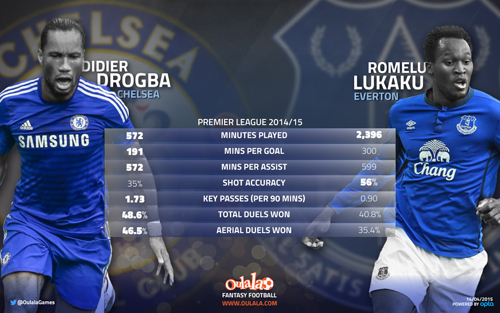 Didier Drogba recently revealed that this season will not be his last and he has no plans to hang up his boots just yet.

At 37, some may question what else Drogba has to offer. The Ivorian has primarily been used as a third-choice striker at Chelsea, having to make do with the occasional late cameo in the Premier League this season.

Has Drogba warranted a one-year extension at Chelsea? After all there’s only so much that should be expected from a third-choice striker.

Opta-powered fantasy football game www.oulala.com decided to pit the 37-year-old against the striker that left Chelsea last summer, Romelu Lukaku. The Belgian was argued by many as Drogba’s ideal replacement before Spaniard Diego Costa was drafted in.

With 16 years between the pair and an unbalanced amount of playing time, the analysis was made on a per minute basis in the Premier League this season to judge whether the Ivorian could match up to the youngster lauded as ‘The next Drogba’.

The stats show that Drogba in-fact leads Lukaku in a number of key areas this season.

The Chelsea forward has played less than a quarter of the minutes that Lukaku has completed this term and when braking down goals scored per minute, it is the Ivorian that comes out on top.

With three goals, Drogba has netted every 191 minutes. In comparison, Lukaku has taken 300 minutes to scored each of his eight goals.

The Belgian however leads for shot accuracy this season, enjoying an impressive 56 per cent compared to 35 per cent from the Chelsea striker.

Arsene Wenger: Why I’m so happy with my Arsenal squad