Stats compare Cazorla and Fabregas ahead of Arsenal v Chelsea 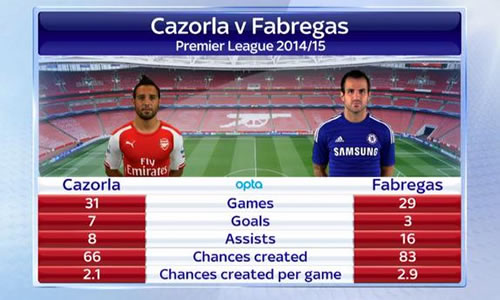 Arsenal raised eyebrows with their decision not to re-sign Cesc Fabregas from Barcelona last summer – but these stats show that Santi Cazorla has been performing on a similar level to the Chelsea midfielder.

Fabregas is preparing to return to the club where he spent eight years when the Blues take on the Gunners at Emirates Stadium on Sunday.

The 27-year-old has made 16 assists for Jose Mourinho’s men in the Premier League so far this season and has contributed with three goals in the top flight.

Cazorla has made eight assists for the Gunners but has contributed seven goals to help Arsene Wenger’s side move up to second place in the Premier League table.

Fabregas leads the way in terms of chances created for Chelsea, with the Spain international having created 83 this season at an average of 2.9 per game.

Cazorla, meanwhile, has created a total of 66 chances at an average of 2.1 per game.