Ander Herrera has been in fine form for Manchester United in recent weeks. Could he be the midfielder they've been crying out for? 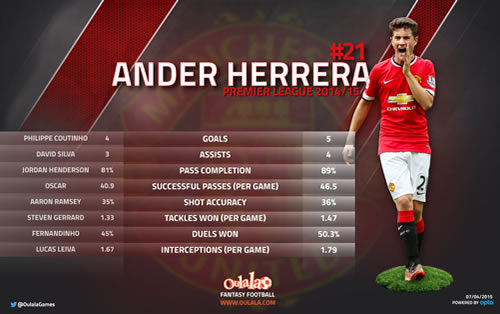 After scoring two goals against Aston Villa at the weekend, Manchester United midfielder Ander Herrera was described as a “genius” by team-mate Juan Mata.

Liverpool manager Brendan Rodgers has described winger Philippe Coutinho as a player of the season contender, but despite playing nine games fewer, Herrera has scored one more goal than the Brazilian. The Spaniard has also enjoyed a superior shot accuracy to Arsenal midfielder Aaron Ramsey (36 per cent to 35 per cent).

The 25-year-old has provided one more assist than Manchester City star David Silva, even though he has six appearances less than his fellow Spaniard.

Herrera has enjoyed a better pass completion than Liverpool’s Jordan Henderson (89 per cent to 81 per cent), putting him three per cent above Manchester United’s overall team average of 86 per cent.

The midfielder has also made more successful passes per game than Chelsea’s Oscar (46.5 to 40.9).

Herrera has made a big impact in his debut Premier League season and could well be the midfielder that Manchester United have been crying out for since Scholes retired in 2013. Watch this space…

Could Herrera be the new Scholes?