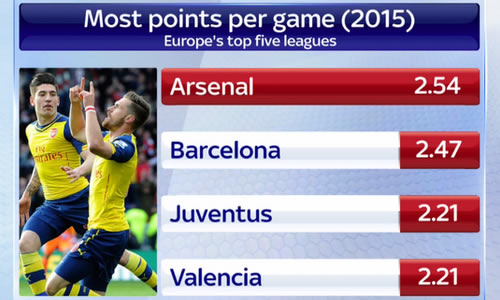 Arsenal have more points per game than any team in 2015 Photo: Sky Sports News HQ/Twitter

Arsenal became the first team in the Premier League to win eight games in a row this season thanks to their 1-0 triumph at Burnley.

And that victory means that the north London side have now won more points per game than any side in Europe since the turn of the year.

The Gunners have picked up staggering 2.54 points per game in 2015, which places them ahead of Barcelona, who have managed 2.47. Juventus and Valencia are Europe’s other top performing teams at the moment.

Arsenal had not won eight games in succession since they went the season unbeaten and won their league back in the 2003-04 campaign.

The north London side’s impressive form has lifted Arsene Wenger’s men up to second place in the Premier League table and seven points behind leaders Chelsea heading into the final six games of the season.

Arsenal are next in action when they take on Reading in their FA Cup semi-final at Wembley on Saturday afternoon.