Cesc Fabregas has been creating goals for Chelsea all season... 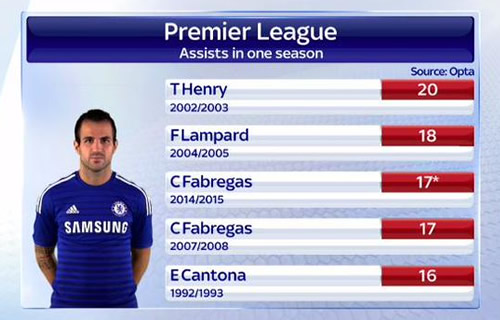 Cesc Fabregas notched up his 17th assist in the Premier League for Chelsea in the 3-1 win over Leicester on Wednesday night – and in doing so equalled his best-ever return in the English top flight.

The Spaniard has been a key part of Chelsea’s title bid this season since his £27m transfer to Stamford Bridge from Barcelona last summer.

The former Arsenal captain has scored three goals and made 17 assists in his 31 Premier League appearances for the west London side to help leave the Blues on the brink of winning their first top-flight title since 2010.

Fabregas’ previous best return in terms of assists in the Premier League came during the 2007-08 season while he was still plying his trade for Arsenal.

The 27-year-old is now just three assists away from equalling Thierry Henry’s all-time record of 20 assists in a single Premier League season, which the Frenchman set in the 2002-03 season.

Fabregas’s next chance to add to that tally comes when Chelsea take on Crystal Palace at Stamford Bridge on Sunday.