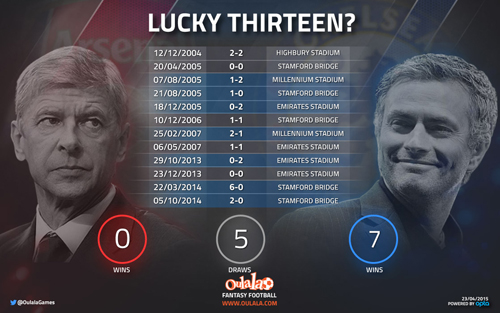 Chelsea make the trip across London to face Arsenal at Emirates Stadium on Sunday.

It will be the 13th occasion that managers Arsene Wenger and Jose Mourinho have met. The previous 12 have seen either a Mourinho win or a draw with Wenger still to experience victory over the Portguese manager.

Arsenal are on a run of eight successive wins in the Premier League, including victories over Manchester United and Liverpool, however Chelsea remain the true test of the current Gunners side. Something has to give.

Opta-powered fantasy football game www.oulala.com took a closer look at the history between the two managers.

The Wenger/Mourinho saga began 10 years ago in December 2004. Arsenal were the ‘Invincible’ Premier League champions and Mourinho was the self proclaimed ‘Special One’ in his first season of English football. Arsenal took the lead twice at The Emirates but Chelsea equalised twice to scrape back a 2-2 draw.

The third meeting between the pair came at the Millennium Stadium in the Community Shield in August 2005. The Premier League winners faced the FA Cup winners as the dawn of the Didier Drogba Arsenal love affair began with the Ivorian hitting a brace in a 2-1 win for Mourinho’s men.

The following game, just two weeks later at Stamford Bridge, celebrated Arsene Wenger’s 500th game in charge of Arsenal but again Drogba ruined the party with a freak goal in a narrowly fought 1-0 win for Mourinho.

In December 2006, the pair met again at Stamford Bridge in a tense 1-1 draw. Mainly remembered for Drogba’s and Jens Lehmann’s penalty box antics and later in the game, Michael Essien’s excellent swerving strike to rescue a point for Mourinho and extend the hold he had over Wenger to six games.

Two months later, the pair met at the Millennium Stadium for a second time in the League Cup final. Again, Drogba came up trumps. The Chelsea striker’s brace led Mourinho to his second League Cup in three years.

When the pair met in March at Stamford Bridge last year, it was Wenger’s 1,000th game in charge of Arsenal but one he’d rather forget. Chelsea won the game 6-0.

However, the game will not be remembered for Chelsea’s excellence on the day but for Andre Mariner’s mix up when the referee sent off Kieran Gibbs instead of the actual offender, Alex Oxlade-Chamberlain. Twitter went into overdrive.

And the most recent and 12th meeting between Wenger and Mourinho, Stamford Bridge last October. Chelsea won 2-0 but it was another game where other events took the limelight over the football after the pair continued their fondness of each other in a touchline tussle.

It’s clear that there’s no love lost between the two managers. The 13th match-up between Wenger and Mourinho should entertain us, even if the football doesn’t.

Wenger refuses to comment on Mourinho ahead of Arsenal v Chelsea