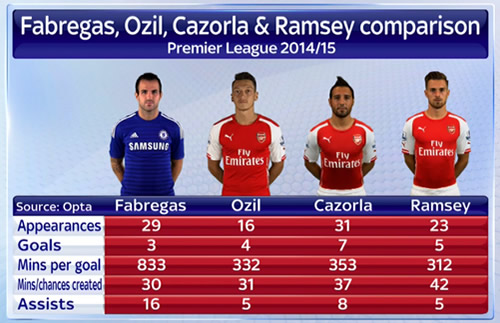 Cesc Fabregas is preparing to return to Emirates Stadium for the first time with Chelsea since leaving Arsenal to join Barcelona back in 2011.

The Gunners raised eyebrows with their decision not to re-sign Fabregas from Barcelona last summer before his £27m move to the west London club.

The 27-year-old has made 16 assists for Jose Mourinho’s men in the Premier League so far this season and has contributed with three goals in the top flight.

The stats above show that Fabregas is trailing Arsenal trio Mesut Ozil, Santi Cazorla and Aaron Ramsey in terms of goals scored this season.

However, the midfielder is comfortably leading the way in terms of assists, with the Spaniard having created 16 goals for his team-mates this term – double Cazorla on eight and comfortably more than Ozil and Ramsey.

Fabregas, who spent eight years at Arsenal, has also created more chances per minutes played than his Arsenal midfield rivals this season.