Stats show only one European team ahead of Arsenal in 2015 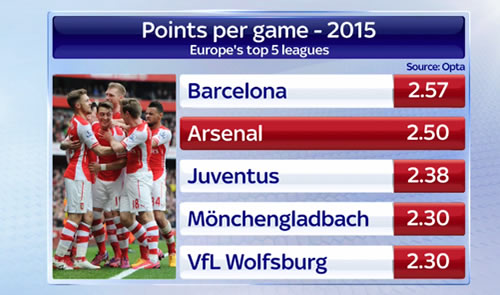 Arsenal are second in the points-per-game stats of 2015 Photo: Sky Sports News HQ/Twitter

Arsenal have certainly been in good domestic form in recent weeks – and the stats now show that they have enjoyed a far better start to 2015 than any of Europe’s top teams.

The Gunners moved up into second place in the Premier League table thanks to a 4-1 win over Liverpool at Emirates Stadium last weekend.

Arsene Wenger’s men are the in-form team in the Premier League and have won nine of their last 10 top flight games.

Now, these statistics show that only Barcelona have won more points per game than Arsenal since the turn of the year.

The Gunners are in fact the only English team in the top five, with the north London side ahead of the likes of Juventus and Wolfsburg.

Arsenal head to Burnley in the Premier League on Saturday as they look to continue their good form and take a step closer to qualification for next season’s Champions League.