Stats show why Man United must swoop for Memphis Depay 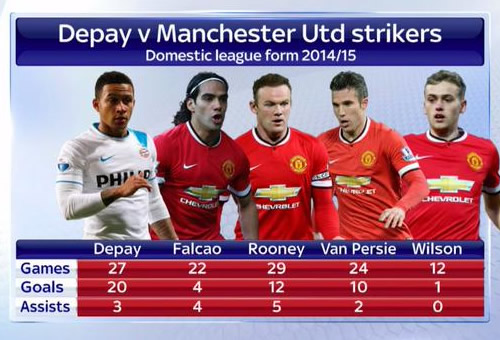 Memphis Depay is continuing to be linked with a summer transfer to Manchester United as Louis van Gaal looks to transform his side into Premier League title contenders next season.

And the Red Devils could do a lot worse than bring the Netherlands international to Old Trafford, if these statistics are anything to go by.

The winger has scored an impressive 20 goals in 27 games for PSV Eindhoven this season, which is more than Radamel Falcao, Robin van Persie, Wayne Rooney and James Wilson.

He has also notched up three assists for his team-mates.

United are likely to have to pay around £25m to sign the 21-year-old, who made his international debut under Van Gaal for Holland two years ago.

Van Gaal is familiar with Depay and inclued him in the Netherlands’ World Cup squad in Brazil last summer.

Depay has also attracted interest from Liverpool and Manchester City in recent weeks, but United are understood to be in pole position to secure the winger’s signature.