Would Raheem Sterling be a good Arsenal signing? www.oulala.com take a look at Liverpool star and Theo Walcott's stars 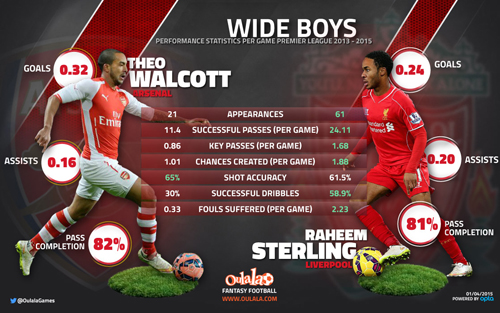 Arsenal are reported to be weighing up a move that would see Raheem Sterling move to The Emirates and Theo Walcott make the switch to Liverpool as part of the deal.

In light of recent speculation, Opta-powered fantasy football game www.oulala.com took a look at the pair since the beginning of last season to see which team would benefit the most from such a move.

The first glaring observation is Walcott’s lack of games during the last two seasons with Sterling making almost three times as many appearances due to the Arsenal player’s continued injury problems.

As the appearance figures of the duo are unbalanced, the focus towards their statistical performances was made via a per game basis.

The Arsenal man also impresses for pass completion with 82 per cent to Sterling’s slightly lower 81 per cent. Whereas the Liverpool winger unsurprisingly takes the plaudits for both successful dribbles (58.9 per cent to 30 per cent) and fouls provoked per game (2.23 to 0.33).

Such a deal could well benefit all involved.

Walcott’s Arsenal career has never really taken off as expected since his move from Southampton and a fresh challenge could be exactly what he needs.

Arsenal would gain from Sterling’s age while Liverpool would not only profit heavily in an expected player plus cash deal due to Sterling’s current high valuation, they’d also be getting a ready made replacement in the form of Walcott.

With Arsenal hosting Liverpool this weekend it is likely that Arsene Wenger and Brendan Rodgers will be keeping a close eye on the pair should such a deal gather pace over the summer.