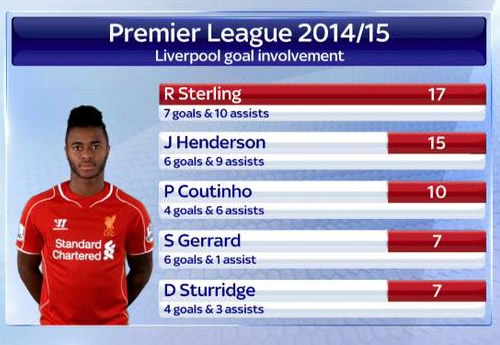 Raheem Sterling scored the opener as Liverpool eased to a 2-0 win over Newcastle United at Anfield on Monday night.

The England international’s future has been a relentless source of speculation in recent days after he rejected the Reds’ offer of a new contract worth £100,000 a week.

Sterling’s goal against Newcastle means that the winger has now been involved in 17 of Liverpool’s Premier League goals this season – more than any other player.

Midfielder Jordan Henderson is second on the list, with the England international being involved in 15 of the Reds’ goals this term.

Philippe Coutinho, Steven Gerrard and Daniel Sturridge round out the top five most influential players in front of goal for Brendan Rodgers’ men.

Monday’s win moved Liverpool to within four points of fourth-placed Manchester City heading into the final six games of the Premier League season.

Sterling will be hoping to feature in Liverpool’s FA Cup semi-final clash with Aston Villa at Wembley on Sunday.