Watch Arsenal fans be hypnotised in build-up to Liverpool clash

The end of the season can be a tense time for fans as the Premier League campaign reaches its climax.

And in the build-up to Arsenal’s home clash with Liverpool at Emirates Stadium on Saturday lunchtime, BT Sport decided to give a select group of supporters a break from it all as they took part in a stage show hosted by hypnotist Peter Powers.

Featuring the famous Claude from Arsenal Fan TV, the fans undergo a hypnosis session with the TV personality and hypnotist ahead of Liverpool’s trip to Arsenal in the Premier League on Saturday lunchtime. 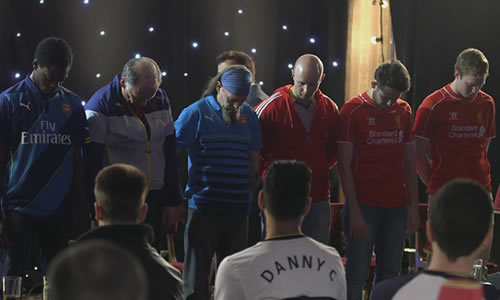 Arsenal head into Saturday’s clash in third place in the Premier League table and just a point behind defending champions Manchester City.

Liverpool, meanwhile, are looking to return to winning ways after their disappointing 2-1 loss to Manchester Untied in their most recent top-flight outing.