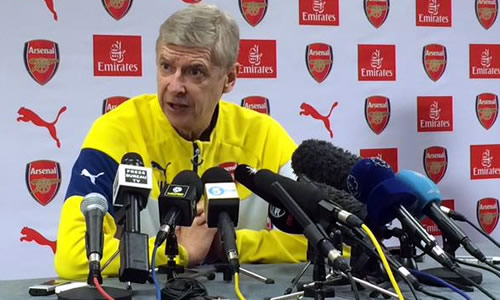 Danny Welbeck could be fit for Arsenal’s clash with Liverpool at Emirates Stadium on Saturday but Jack Wilshere is not likely to be ready to feature, Arsene Wenger has revealed.

Welbeck suffered a knee injury while on international duty with England but the Gunners boss said that the striker could be ready to return to action against the Reds in the clash in north London.

Wilshere, meanwhile, has not featured for the north London club since November after undergoing ankle surgery.

The midfielder is now back in full training but Wenger confirmed at a news conference on Thursday morning that he would not be ready for Saturday’s clash, along with the likes of Mikel Arteta, Mathieu Debuchy and Abou Diaby, who all remain sidelined.

Wenger also added that Alex Oxlade-Chamberlain is not available for the clash with the Merseyside outfit.

Wenger told a news conference at Arsenal’s training ground on Thursday: “Oxlade-Chamberlain is back in training as well but won’t be available. Welbeck has a slight knee injury. He has a little chance for Liverpool.”

Asked about Wilshere, Wenger added: “I don’t know whether he will be involved yet.”

Chelsea and Arsenal stars dominate statistical team of the season