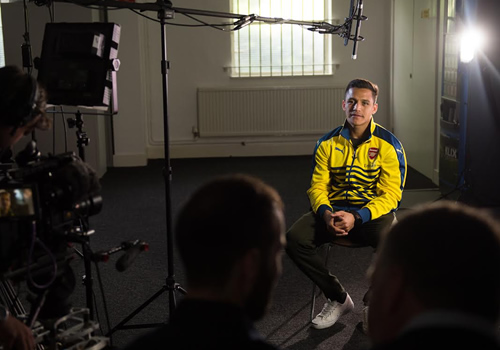 Alexis Sanchez says that he is feeling completely comfortable at Arsenal following his transfer from Barcelona last summer.

The Chile international has been in fine form for the north London side since his £35m move to Emirates Stadium last year, earning a reputation as one of the Premier League’s most consistent performers.

Sanchez score 16 goals and made eight assists in the Premier League to help Arsene Wenger’s men secure a third-place finish and a direct route into the group stage of next season’s Champions League.

And the 26-year-old says that he feels completely at home at Emirates Stadium and settled with his new team-mates.

Sanchez told BT Sport: “There is a joyful atmosphere in the dressing room.

“Arsenal is a magnificent club and I hope to win many titles here. I’m going to do my very best to help the club achieve success.”

He continued: “The reason why I moved to Arsenal is because there were a group of young players with the ambition to achieve things.

Sanchez will be expecting to start when Arsenal take on Aston Villa in Saturday’s FA Cup final at Wembley.

The FA Cup Final is live on BT Sport. Watch all the build-up, including the full interview with Alexis Sanchez, on BT Sport 1 with a live preview show at 1pm from Wembley ahead of the live match coverage from 5pm.

Alexis Sanchez: Why Arsene Wenger is an Arsenal legend