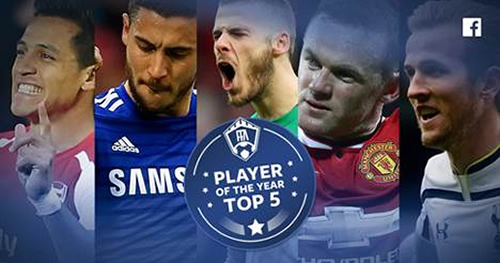 David De Gea, Eden Hazard, Harry Kane, Wayne Rooney and Alexis Sanchez have been voted as the top five players of the season in this year’s inaugural Facebook Football Awards.

More than one million votes have been cast worldwide as fans had their say on the best performers of the 2014-15 Premier League season.

The Facebook Football Awards offers Premier League fans from around the world the only opportunity to vote on who they think has performed best this season.

The winners of these, and two special awards based on Facebook profile performance, will be announced live on BT Sport 1 from 7pm on Tuesday 26 May.

Best Premier League Club of the Year
All 20 clubs Premier League clubs are eligible, with fans choosing the club they feel has performed best throughout the season. This club might have staved off relegation with minimal resources, competed for a place in Europe when no-one expected it, or won consistently against the top four.

Manager of the Year
The outstanding managerial performance across the season.

Content of the Year
All Premier League clubs were given the opportunity to submit their favourite piece of content from the 2014-15 season – so that fans can pick their favourite.

BT Sport Best XI of the Year
Any player who had made at least five 2014-15 Premier League appearances as of April 1st 2015, classed as goalkeeper, defender, midfielder or forward. The goalkeeper, four defenders, four midfielders and two forwards with the most votes will make up the team.

Mirror Football Fan of the Year
Nominations supplied by clubs