George Coetzee, Graeme Storm and Byeong-Hun An go head to head in a unique footgolf challenge

The trio, who are all ambassadors for global logistics provider GAC, left their clubs in their golf bags and laced up their football boots to take some time away from the golf course and prepare for this week’s BMW PGA Championship at Wentworth.

There was added spice to the contest given that George Coetzee and Graeme Storm are passionate Liverpool fans, while Byeong-Hun An is an ardent Manchester United fan.

It was really good fun, although we’re not that good. I’ll definitely be playing it again

Despite running into trouble with some trees on the first fairway, George Coetzee took an early lead on the first hole with a seven.

However, all three golfers got into some serious trouble on the second having to navigate their way through the deep rough after hooking their kick-offs deep into the bushes down the right hand side of the fairway.

It all came down to the short Par 3 final hole, where all three players left themselves with a birdie chance. Ultimately it was Englishman, Graeme Storm who held his nerve and sunk his birdie kick to claim victory leaving George Coetzee to regret his “That’s like the English at the World Cup” comment on the first tee.

Graeme commented on his win: “It was a bad start from me, but I finished really strongly and I’m delighted with the win. I thought it was great fun – it was very demanding and I was in the rough a lot but I could definitely grow to like it. It was very pleasing to beat George and Ben – I haven’t beaten them at golf yet this year, so to beat them at footgolf is a good start. 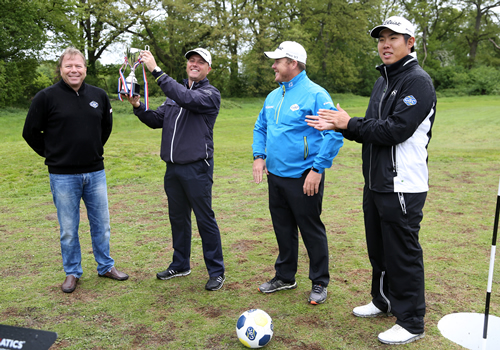 George Coetzee, Graeme Storm and Byeong-Hun An were all smiles after the challenge at Ritchings Park Photo: Handout

My love of football started from when I was about three years old, so it was great fun to get the chance to do something different like this. I used to be quite a handy left back so it brought back the memories from when I was a boy.”

Coetzee added: “That was Liverpool Champions League Final stuff from Graeme there – a great comeback. It was really good fun, although we’re not that good. I didn’t even know Footgolf was a thing before this, but I’ll definitely be playing it again. I need a re-match next year so I can beat Graeme.”

Former US Amateur Champion Byeong-Hun An commented: “Footgolf was good fun, although I’d say some work is definitely needed if I am to beat Graeme next time. I started loving football in 2002 watching the World Cup in Korea and for the last 10 years Manchester United has been my favourite team so I’m always keen to do anything to do with football, so footgolf today was a great experience for me.”