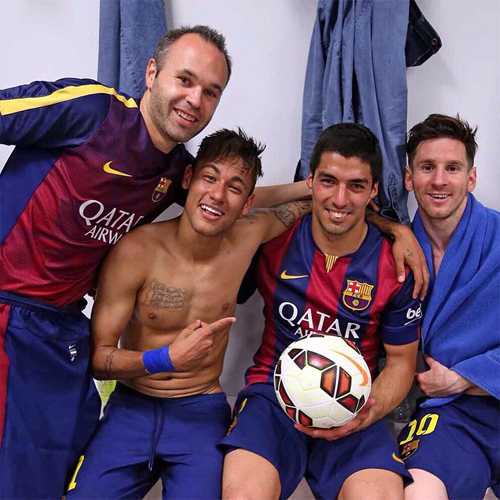 Barca smash eight past Cordoba ahead of Pep reunion

Luis Suarez scored his first Barcelona hat-trick in the 8-0 thumping at lowly Cordoba as the club prepares to get revenge over Bayern Munich this week. The Germans handed out their own pasting two years ago en route to their Champions League win, beating Barca 7-0 over two legs. It will be an occasion made even more special by the return of Pep Guardiola, who oversaw a sparkling period of success at the Nou Camp. His stamp is still apparent at Barcelona as Lionel Messi continues the sort of form seen under Guardiola. The Argentinian scored twice during the weekend win, taking his tally for the season up to 51, and declined the opportunity to seal a treble, instead allowing Neymar to take a late penalty. Gerard Pique and Ivan Rakitic scored the other two which virtually condemns Cordoba to the Segunda Division, and keeps Los Blaugrana top of La Liga.

Discontent with Messi edging ahead of him in the Pichichi rankings prior to kick-off, Cristiano Ronaldo hit his sixth hat-trick of the season as Real Madrid saw off a tricky test in Sevilla. The hosts had not lost at home for 35 matches, a run stretching back to March 2014, but Ronaldo put Madrid in control with a quick-fire double. His first came from an Isco cross before he scored from James Rodriguez’s centre just two minutes later. However, like a fortnight ago at Celta, Real shot themselves in the foot by gifting Sevilla a penalty on the stroke of half-time – Sergio Ramos the guilty party. Carlos Bacca scored to make it 2-1, though Ronaldo yet again stepped up to put daylight between not only Madrid and Sevilla, but himself and Messi in the scoring charts. It is now Ronaldo 42, Messi 40. Vicente Iborra made the climax interesting with a second goal for the home side but they couldn’t push for an equaliser as Madrid saw the game out and remain hot on Barcelona’s heels.

Financial worries continue to haunt the side off the field, but on it Elche have retained their La Liga status. Their win at Malaga on Sunday took them to 40 points and 10 clear of the drop zone with three games to play, a massive achievement for a side that had spent long periods in the relegation zone. A run of four wins in their last five has catapulted them clear of any danger with games to spare, a thrilling period with vital victories over Cordoba, Sociedad and Deportivo. Their 2-1 win against Malaga was tough going as Elche had to play with 10 men for the final 20 minutes, but goals from top scorer Jonathas and Chelsea loanee Mario Pasalic helped them to the three points. A tumultuous summer lies ahead, with key players such as Jonathas likely to be sold, but the club from south-eastern Spain will be welcoming Real Madrid and Barcelona to the Martinez Valero stadium next season.