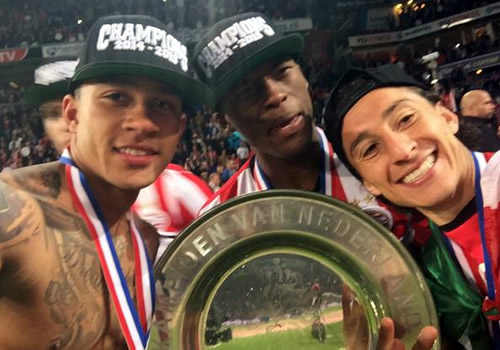 Memphis Depay took to social media on Thursday afternoon to reveal his delight at agreeing a deal to join Manchester United from PSV Eindhoven this summer.

United confirmed in a statement on Thursday afternoon that they had agreed a deal with PSV and the player for the transfer of the winger when the summer window opens in June, subject to a medical.

And the player himself used his Twitter account to give his reaction to his move following the confirmation of the transfer.

I always say; Dream, Believe, Achieve. I was dreaming and believing of becoming the champions of the Eredivisie with PSV and we achieved it.

I’m extremely grateful towards @PSV, all the fans, @UnderArmour and @SEG_Football for believing in me.

Now it's time to set my goals again on winning trophies with @ManUtd pic.twitter.com/7yYBgZ62Pr

Depay, 21, played under current United boss Louis van Gaal at last summer’s World Cup in Brazil as the Dutch finished in third place in the tournament.

The forward has scored 21 goals and made four assists in 28 Eredivise appearances as he helped fire PSV to the Dutch top-flight crown last weekend.