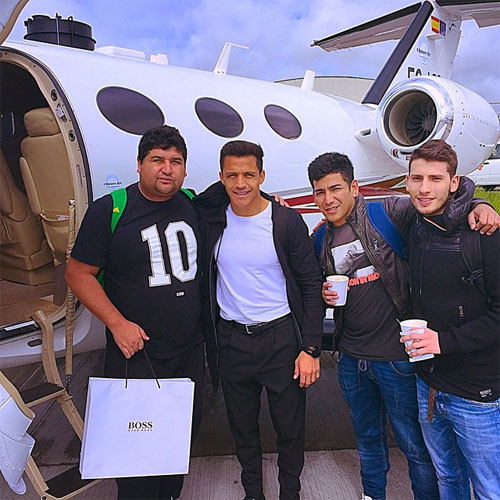 Alexis Sanchez has paid tribute to his close friends after the Arsenal forward spent the last week hanging out with his brother and two pals.

Sanchez has been an instant hit in the Premier League after the Chile international completed a £35m move to Arsenal from La Liga giants Barcelona last summer.

The South American scored twice in a 3-1 victory over Hull City at KC Stadium on Monday night to strengthen the north London side’s bid to finish second.

And Sanchez, who has been posting a series of snaps with his brother friends over the past five days, gave his own definition of friendship in a post on Wednesday morning.

Sanchez posted the above photo and wrote: “A friend is the person who enjoys your success and who rejoices in it without envy. It is also the person who remembers it with you when it fades away…”

Sanchez has scored 16 goals and has made eight assists in 31 Premier League appearances this season.

More: Sanchez enjoys dinner with his brother and friends

The Arsenal forward was named in the PFA team of the year after an impressive debut campaign.

Luis Suarez: Why I’m happy Liverpool captain talked me out of Arsenal move