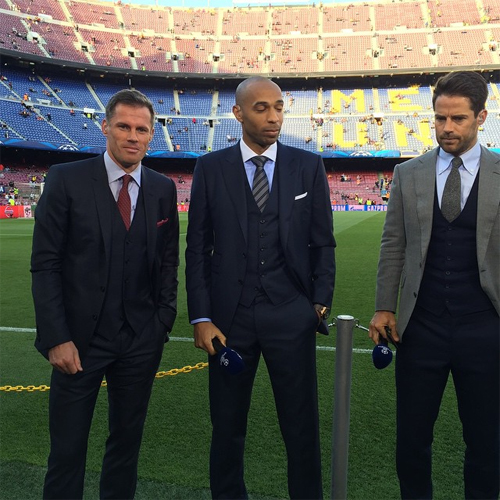 Jamie Carragher is clearly loving his job with Sky Sports after the former Liverpool defender snapped a photo with fellow pundits Thierry Henry and Jamei Redknapp in Camp Nou.

The retired England centre-half was doing punditry on Barcelona’s clash against Bayern Munich in the first leg of their Champions League semi-final on Wednesday night.

And to the Liverpool legend’s credit, he managed to snap a photo with the Marks and Spencer model and former Gillette ambassador where he looks the most handsome Sky Sports pundit ahead of kick-off.

Gerard Houllier’s Liverpool side managed to secure a goalless draw at Camp Nou in the Uefa Cup semi-final in 2001 before the Reds went on to win the competition.

However, his predecessor Rafael Benitez went one better after he masterminded a 2-1 victory over Lionel Messi and co en route to the Champions League final in 2007.