Photo: Carragher snaps Arsenal and Chelsea legends at The Bridge 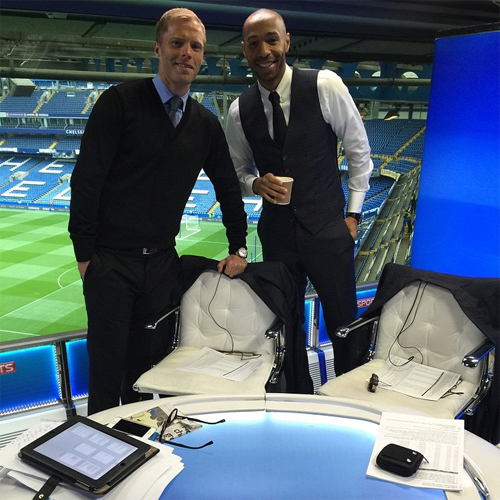 Jamie Carragher snapped a photo with his Sky Sports colleagues Eidur Gudjohnsen and Thierry Henry ahead of a busy day of Premier League action on Sunday.

The former Reds defender came up against Gudjohnsen and Henry many times during his playing career as Liverpool rivalled Arsenal and Chelsea for silverware in the last decade.

In particular, Arsenal legend Henry terrorised Carragher and the Liverpool defence on more than one occasion, memorably scoring a hat-trick against the Reds at Highbury in 2004.

So Carragher must be relieved to be on the same team as the Arsenal and Chelsea legends for a change, uploading a snap from the Sky Sports studio at Stamford Bridge.

Carragher posted the above photo and wrote on Instagram: “Super Sunday from Stamford Bridge on Sky Sports 1 from 12:30. The title is Chelsea’s but can they seal it today?”

However, the former England defender failed to win a Premier League winner’s medal, unlike his colleagues Gudjohnsen and Henry.

Photos: Ozil and Sanchez all smiles in Arsenal training session