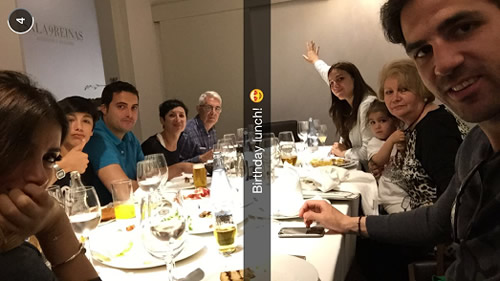 Cesc Fabregas took to social media on Monday afternoon to share a picture of his birthday meal with family and friends.

The Chelsea midfielder, who helped the Blues win the Premier League title with victory over Queens Park Rangers on Sunday, turned 28 years old on Monday and spent some time with his family in the afternoon.

Fabregas shared the picture above on his official Snapchat account and wrote: “Birthday lunch.”

His partner Daniella Semaan and sister Carlota were among the people in the picture.

Fabregas has been an integral part of Chelsea’s title winning side since his transfer to the west London club from Barcelona last summer.

The former Arsenal captain has scored three goals and made 17 assists in 32 Premier League games for Jose Mourinho’s men so far this term.

He also scored twice and made three assists in the Champions League for the west London side.