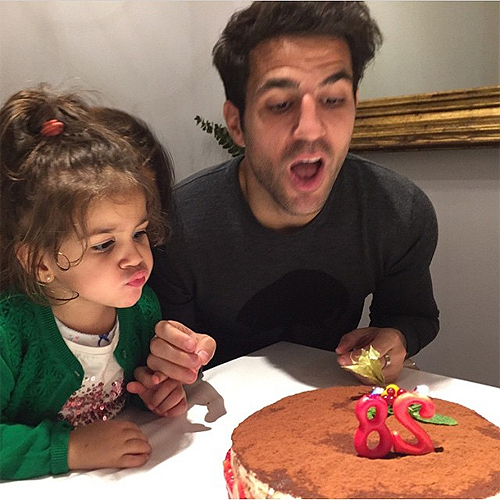 Cesc Fabregas celebrated his 28th birthday with a special lunch, a cake and the Premier League title.

The Blues midfielder helped Jose Mourinho’s side edge to a 1-0 victory over Crystal Palace at Stamdford Bridge on Sunday, which sealed their fourth Premier League crown.

Of course, it was the Spain international’s first top-flight title in England after Fabregas failed to win the Premier League with former club Arsenal.

So it was no wonder Fabregas treated himself to some birthday cake on Monday as the World Cup winner celebrated turning 28.

Fabregas posted the above photo and wrote on his Instagram page on Tuesday afternoon: “Thank you all for the birthday messages i recieved yesterday. What a special way to be 28 years old!! Feel very blessed. #Cesc28”

Fabregas has scored three goals and has made 17 assists in 33 Premier League appearances this season.

The Chelsea star wasn’t named in the PFA team of the year despite creating more goals than any other player.