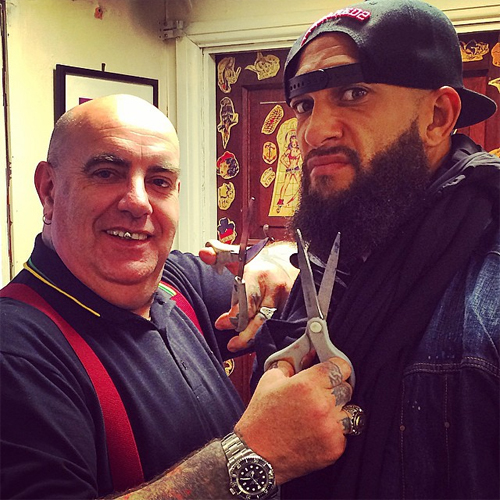 One of the Premier League’s most recognisable beards appears to be under threat after Tim Howard uploaded a photo with his tattoo artist on Thursday morning.

Lal Hardy, whose Instagram profile boasts the tag line “new wave tattoo artist”, posed with the Everton goalkeeper with two pairs of scissors in his hands.

The former Manchester United man looked rather hesitant about the prospect of a beard trim, an emotion shared with many east London hipsters.

Howard uploaded the above photo and wrote: “Sometimes a great friend…other times a menace to society! But always good to see you brother @lalhardy #inkgang”

Hardy, meanwhile, was rather more direct in his approach in his caption under the same photo on the tattoo artist’s Instagram profile.

Hardy wrote on his Instagram page: “Right shall i trim the beard of @timhow1 ? Yes or no #toffees #everton #evertonfc”

The 36-year-old has made 28 Premier League appearances this season, racking up 2,476 top-flight minutes.

Howard, who has earned 104 caps for USA during his carrer, completed a £3m move to Everton from Manchester United in 2006.