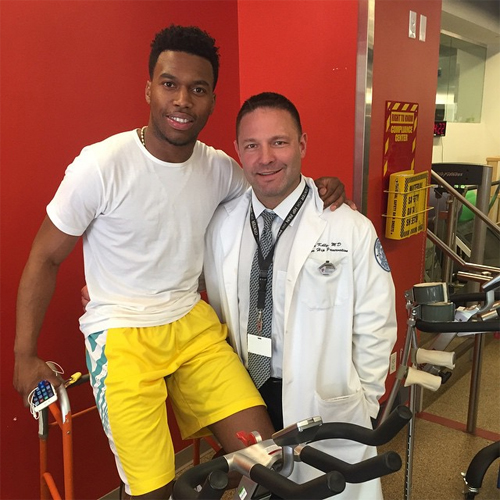 Daniel Sturridge has reassured Liverpool fans that he will be back to his best in “no time” after the striker underwent an operation earlier this week.

The England international has struggled with injuries to his calf and thigh this season and has also been suffering from a hip problem.

The 25-year-old striker underwent a successful operation on his hip as he bids to recover in time for the 2015/16 Premier League campaign.

Liverpool manager Brendan Rodgers revealed that Sturridge isn’t likely to feature for the Merseyside outfit until September, and the Liverpool striker had his say on his prospects on Instagram.

Sturridge wrote on Instagram: “With the genius himself Dr. Bryan Kelly. Thanks for doing a great job on my hip!!! Everything this man has explained to me gives me assurance that I’ll be back to my best in no time!! Thank you.”

Sturridge has been limited to just seven Premier League starts for Brendan Rodgers’ men this term after missing most of the first half of the season due to injury.

The Liverpool forward has scored four goals and made one assist in 12 Premier League games for the Merseyside outfit this season.

The former Chelsea man’s last appearance for Liverpool came in the 1-0 FA Cup win over Blackburn Rovers at the start of April.