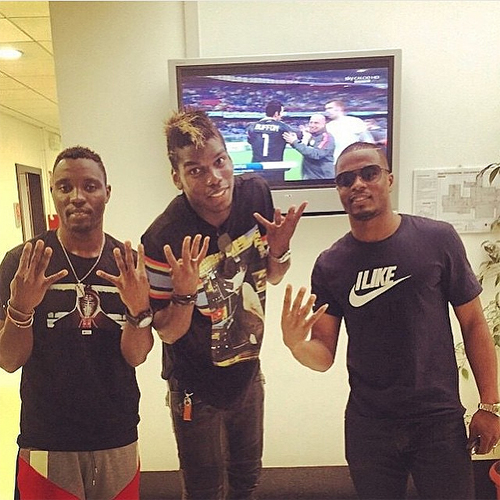 Paul Pogba uploaded a snap with Patrice Evra and Kwadwo Asamoah after Juventus won their four consecutive Serie A title on Saturday night.

The Turin side extended their spell of dominance in the Italian top-flight with a hard-fought 1-0 victory over Sampdoria in Genoa.

Juventus have officially won 31 Serie A titles, although the club’s supporters were celebrating 33 top-flight crowns after two titles (2005 and 2006) were taken off them due to the Calciopoli match-fixing scandal.

And Juve midfielder Pogba referenced the 33 titles in a photo with Manchester United legend Evra and Ghana international Asamoah that the France international posted on Instagram on Sunday morning.

The United target is one of Europe’s most-coveted youngsters after a series of impressive performances for the Serie A champions this season.

Pogba has scored seven goals and has made two assists in 23 Serie A appearances this season, whilst the talented youngster has scored one goal in the Champions League.

The France midfielder has won three Italian top-flight crowns following his move to Turin from United on a free transfer in 2012.

Arsene Wenger: Arsenal squad strongest it’s been for many years

Photo: Carragher snaps Arsenal and Chelsea legends at The Bridge