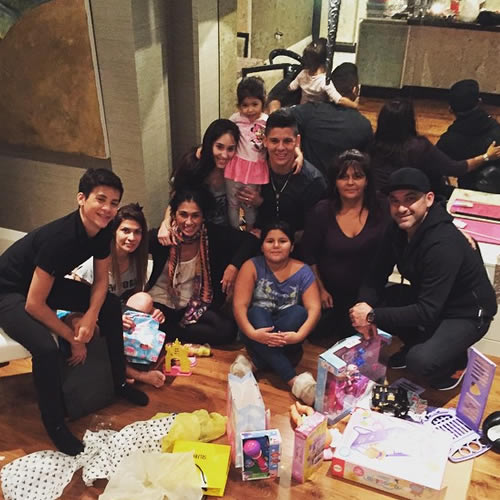 Marcos Rojo took to social media on Saturday evening to post a picture of himself and his family celebrating his daughter’s birthday.

The Manchester United centre-half sat out the Red Devils’ 1-0 loss to West Bromwich Albion at Old Trafford due to injury as Louis van Gaal’s side suffered a blow to their hopes of finishing in the top four.

But despite the disappointment of watching his team-mates slump to their third successive defeat, Rojo looked to be in good spirits with his girlfriend Eugenia Lusardo as they celebrated their daughter Morena’s third birthday.

Rojo posted the picture above on his Instagram account on Saturday evening and wrote: “happy birthday to my beautiful daughter – I love you so much!”

Rojo has been limited to just 18 Premier League starts for Manchester United this season since his transfer from Sporting Lisbon last summer.

Saturday’s loss left United fourth in the Premier League table and four points ahead of fifth-placed Liverpool heading into the final three games of the season.

Arsene Wenger: Arsenal squad strongest it’s been for many years