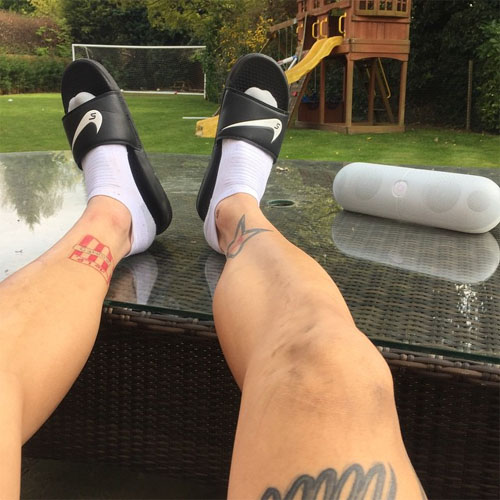 Marcos Rojo enjoyed a brief kickabout with his friends before the Manchester United defender goes to Old Trafford to support his team-mates against West Bromwich Albion.

The Argentina international is still struggling with adductor injury which has kept the centre-half sidelined since a 4-2 victory over Manchester City in the derby on 12 April.

Rojo has endured an injury-hit campaign for the Red Devils after a £16m move to the 20-time English champions from Portugese outfit Spoting Lisbon in the summer transfer window.

The 24-year-old took to Instagram to show off his tattooed legs as the centre-half relaxed after an impromptu game of football with his pals.

Rojo wrote: “after playing around at home relaxing. Old Trafford tomorrow to support my mates”

Rojo has made just 20 Premier League appearances for Louis van Gaal’s side this season, racking up less than 1,000 minutes of top-flight action.

The United defender was part of the Argentina side that finished as World Cup runners-up last season.