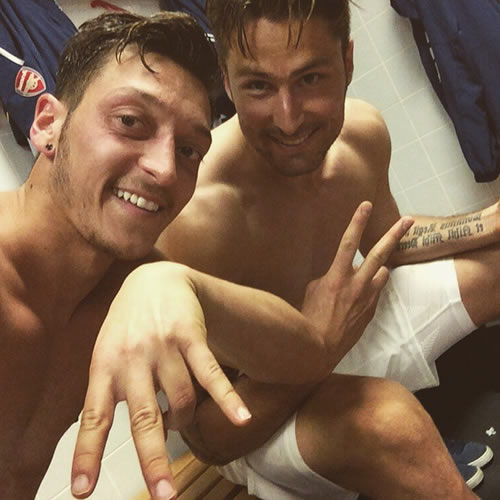 Mesut Ozil was all smiles alongside Olivier Giroud after the pair helped Arsenal to a 3-1 victory over Hull City on Monday night.

Alexis Sanchez opened the scoring at the KC Stadium with a deflected free-kick in the 28th minute, before Aaron Ramsey netted a second just five minutes later.

Sanchez then rounded goalkeeper Steve Harper to slot home and make it 3-0 on the stroke of half-time.

Stephen Quinn’s header gave Hull hope after the break, but the Gunners held on to move to within three points of second-placed Manchester City.

And World Cup winner Ozil was clearly thrilled to play his part in the win, as he posted the picture above on his Instagram account and wrote: “Job done. 70 points. #YaGunnersYa”

The win left Arsenal having won nine of their last 10 Premier League games and third in the top-flight table.

Arsenal take on Swansea City in their next Premier League game on Monday night.

Gary Neville: What Arsenal need to beat Chelsea to the title next season