Rafael Nadal and Maria Sharapova are preparing for the defence of their French Open titles... 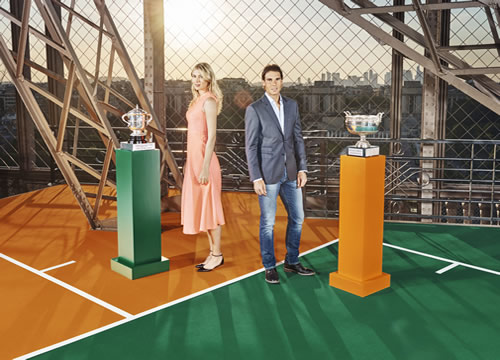 Rafael Nadal and Maria Sharapova looked sharp as they posed for a picture at the Eiffel Tower as the pair prepare to defend their French Open titles.

Here’s what the pair had to say in the build-up to the second Grand Slam of the year in Paris.

Rafael Nadal: “Obviously I didn’t have the best clay season the last couple of years. It’s obvious that I had more up and downs. Even like this I was able to play semi-finals in Master 1000 another final, and one quarter-finals. It’s not terrible, but if we compare with other years, obviously looks bad, no? That’s always going to happen when you achieve a lot in the past. You are always going to have the comparisons, but that’s it. My feelings are good. Obviously when you lose more than other years it’s obvious the confidence is a little bit less. But the positive thing is I started again in January after tough second half of the year last year. And since January, day after day, I think I’ve improved a lot. I’m having less bad days than in the first few months. I am a little bit more consistent, I feel. Let’s try my best here. Let’s try to play a great tournament here. I think I can do it.”

Maria Sharapova: “I try to improve myself and my game on every single surface that I play. I’m challenged by other players. I want to improve because the other players raise a very high standard on the court. But I never think about what my better chances are on grass or here or the moon or somewhere else. It’s definitely the Grand Slam where I have been most successful in the last three years. No doubt about it. I don’t know what the future will show, and I think that’s why we are here. No matter who the favourites are or not, or the underdogs, that’s why we play the game.”