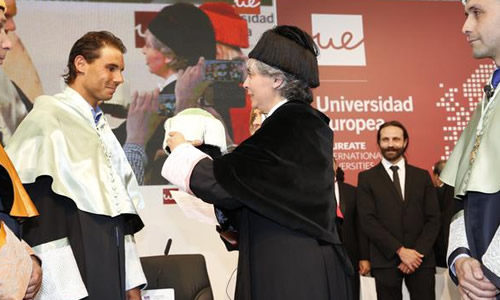 Rafael Nadal was all smiles as he received an honorary doctoral degree, Doctor Honoris Causa, from the European University of Madrid on Monday.

The 28-year-old is in the Spanish capital ahead of the Madrid Masters, where he is the defending champion and four-time winner.

Nadal was clearly thrilled to be honoured at the University, as he posted the picture above on his Twitter account and wrote: “Very happy to be Doctor Honoris Causa by the @UEuropea Thank you very much for this great honor #nadalhonorisue.”

The nine-time French Open champion will be looking to return to winning ways in the build-up to Roland Garros after he suffered a semi-final loss to Novak Djokovic at the Monte-Carlo Masters last month.