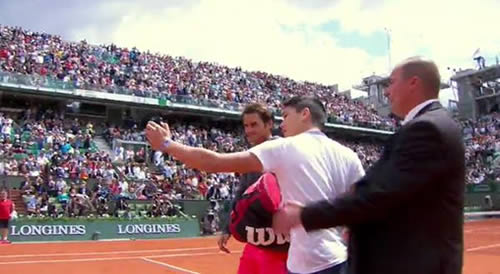 Roger Federer was not happy about the incident Photo: Eurosport

Roger Federer was less than impressed with the security at the French Open after a fan entered the court and attempted to take a selfie with him after his first-round victory over Alejandro Falla.

A young fan walked up to the Swiss superstar after his 6-3 6-3 6-4 win in Paris and tried to snap a picture with the second seed as the Roland Garros security team took their time to respond.

Federer was clearly unhappy about the incident and expressed his discontent in his post-match news conference.

“It happened yesterday in the practice, too. It’s just a kid, but then three more kids came.

“And today on centre court where you would think this is a place where nobody can come on, [he] just wanders on and nothing happens. [It] happened during the finals in 2009 as well for me.

“And so clearly I’m not happy about it. But nothing happened, so I’m relieved. But clearly it wasn’t a nice situation to be in.”

He continued: “[Roland Garros director] Gilbert Ysern already came and apologised to me, and we had a quick conversation. I just told him what I think needs to happen. I told him about yesterday, as well, which he didn’t know about.

“I’m sure they will take the necessary steps now, but this doesn’t only mean for this tournament for this year; it means for all the tournaments we play all the years coming up.

“We need to make sure that it’s safe out there and people don’t just wander on the court like a free pass, you know. That’s how it’s supposed to be.”