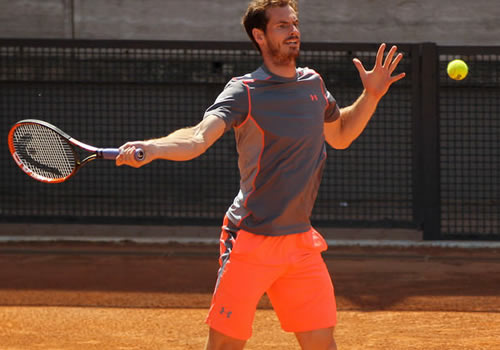 After waiting until the very last moment to opt into the Rome Masters on Tuesday evening, Andy Murray has pulled out with fatigue just a couple of hours before he was due to play his third-round match against David Goffin.

All seemed well with Murray after winning his first match to score a 10-0 unbroken run on clay—a career-best. He beat the dangerous Jeremy Chardy with relative ease, 6-4, 6-3, yesterday and afterwards gave no indication that he had any significant physical problems:

“The thumb is OK, my legs were a bit tired at the beginning, but I started to feel better after the first few games. I felt I played a really good match. He served about 80 percent in the first set, [so] it was tough for me, but I hung in and felt like I moved pretty well.”

We tried to make the right decision according to what my body is saying. I’ve played so much tennis — 9 in 12 days… It’s been a very, very long three weeks for me. It just seemed like the right thing to do

The delay in his decision to play Rome at all was due to a fine but gruelling run over the last fortnight. He opted out of the first big clay tournament of the year in Monte-Carlo to get married, and then went to Barcelona to train for a week before beginning his French Open campaign in Munich.

There he beat Philipp Kohlschreiber in a rain-delayed final on Monday after over three hours of intense tennis. He then headed straight to Madrid, where he was again taken to three sets in his first match by Kohlschreiber—in the early hours of the morning courtesy of severe schedule over-runs.

But thereafter he did not lose a set, despite playing No6 seed Milos Raonic, No5 seed Kei Nishikori and finally the defending champion, the king of clay himself, Rafael Nadal in the final.

So having failed ever to reach a clay final before, Murray won two—one of them a big Masters—in the space of six days. But his efforts have finally taken their toll. He explained his decision in Rome:

“I’m obviously tired. I felt OK yesterday and felt like I played a very good match, and this morning I was pretty exhausted when I got up, and then we came here and we practised, I did a 40-minute warm-up and felt extremely flat.

“I just chatted for about half an hour about what was the best thing to do. There’s a lot of studies suggesting that when you’re very tired or run-down and you continue to compete you can risk injury or picking up an illness or whatever. I didn’t feel in the end that it made sense for me to keep going.

“We tried to make the right decision according to what my body is saying. I’ve played so much tennis—9 in 12 days, and I also played a couple of doubles matches… well it’s been a very, very long three weeks for me. It just seemed like the right thing to do.”

Goffin, who survived match points to beat Jo-Wilfried Tsonga late into the Rome evening yesterday, receives a walkover to the quarter-finals, which will be played on Murray’s birthday tomorrow. The Belgian will play either David Ferrer or Guillermo Garci-Lopez, with the prospect of top seed Novak Djokovic in the semis.

Not that the Rome schedule is now of concern to Murray. Instead he intends to return home.

“I’m going to take a few days of rest. I won’t train, I won’t go on the court, I just need a few days to recover and go home, either tonight or tomorrow morning. Just spend a few days at home, maybe I’ll see my physio over the weekend to try to help the recovery process, and I’ll try to rest and sleep. Hopefully I’ll get to Paris early next week.”

The French Open, where Murray has twice been a semi-finalist, begins on 24 May.