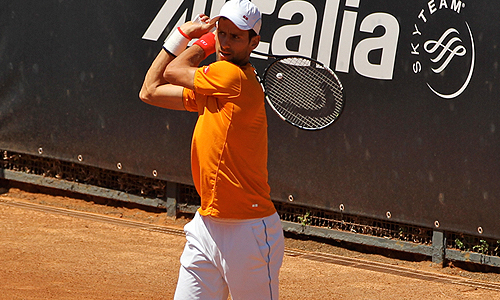 Coming to Rome from back-to-back victories in Indian Wells, Miami and Monte-Carlo—and with the Australian Open title and Dubai final to boot—it is little wonder that the world No1 by thousands of points, Novak Djokovic, arrived in Rome as the favourite to retain his title.

But even putting to one side his 17-match winning streak, his 30-2 win-loss for the season, and that he is now level with Roger Federer on 23 Masters titles, it is as much his record in the Eternal City that makes his prospects so good.

Djokovic has played in Rome every year since 2007, and every year has reached at least the quarter-finals. In five of those appearances he has reached the final, three times won the title, and twice beaten the king of Rome, the king of clay, Rafael Nadal, in the final.

That is a rare and remarkable clay achievement.

Djokovic took a well-earned rest after winning in Monte-Carlo, and so was among the first to arrive in Rome to acclimatise to the courts and the steadily rising temperatures. And if ever a man looked relaxed and confident, it is the Serb, as quick look at the hundreds of selfies posted by his fans will testify.

He explained that the rest had indeed done him a power of good.

“I had a really successful period and I needed a bit of time—seven to 10 days of rest. I could have played [Madrid] but it was better for Rome and Paris not to play it. I needed a platform where I could perform well. You need that presence of mind and fresh legs to overcome the challenges.”

For of course it is not just the defence of his Rome title at stake in Djokovic’s scheduling. He would dearly love to add the French Open to the other three Grand Slams that he already owns. And with the conditions in Rome much closer to those in Paris than the faster, altitude-affected Madrid, it sounds like a smart choice.

“I made the decision thinking it would possibly affect this week and Roland Garros. We will see. I’ve done things the right way the last couple of weeks, my entire team is here and taking this tournament really serious. We hope to have a good result.”

But as so often before, it is the prospect of Nadal that looms, ready to thwart his ambitions. Six times they have locked horns at Roland Garros, six times Nadal has won. And although Djokovic’s record in Rome is outstanding—he and Nadal have won the last 10 titles between them—Nadal’s has been at another level: 10 visits, nine finals, seven titles. That’s a 45-3 run.

And if the early months of 2015 suggested there was a glimmer of hope for Djokovic this year, after Nadal missed so much of the back-end of 2014 with injury and illness, there were ominous signs for the Serb and for everyone else.

Nadal may have won only one clay title this year, the 250 in Buenos Aires, and lost in his second match in Barcelona. But with maximum points to defend in Madrid, his old to form and devastating clay-court game were beginning to re-emerge. He reached the final in the Spanish capital with increasingly impressive performances—such that even the modest Nadal admitted he was on the up.d

“For the past couple of days I have been playing better and better every day. That’s always very good news. I am in the final. I am happy for that… Today [against Tomas Berdych] I played again at a very good level. Let’s see tomorrow if I am able to continue with that positive feeling.

“I worked a lot to have that feeling, and today I had that feeling that I’ve been trying to find for a while.”

The final may not have gone according to the Spanish script—Nadal looked tight and made plentiful errors, and Andy Murray took full advantage to score his first clay victory over Nadal.

However, Djokovic anticipated that the familiar Nadal would be back to winning ways come Paris.

“I expect Rafa to play well in any tournament on clay. Yes, he did not have the start of the clay court season he hoped. He sets high standards and people look for those from him. He loves playing Madrid and he always peaks at Roland Garros.

“[But] I don’t think about who is the favourite. I’ve played so many times against these guys. It’s not distracting me or bothering me, it excites me. It gives me inspiration and motivation. But my approach, to be in the moment, also helps, so I need to focus on this tournament first.”

And the line-up in Rome is formidable: the first clay tournament this year to feature all of the “big four”.

It is worth noting, then, that No2 seed Federer, who won the Istanbul title a fortnight ago, has twice been losing finalist to Nadal in Rome, and lost a third time back in 2003 to Felix Mantilla.

It is also worth noting that Murray, as well as winning back-to-back clay titles in Munich and Madrid this week, was a semi-finalist in Rome in 2011—losing in a final-set tie-break to Djokovic—and a quarter-finalist last year, winning the first set, 6-1, before Nadal won in three.

Three top-20 players have pulled out injured—No6 Milos Raonic, No15 Gael Monfils, No19 Tommy Robredo—but there are plenty more challenges for all four of the top seeds.

Djokovic may heave a sigh of relief that Nadal was drawn in Federer’s half of the draw. He may also be mindful that, though Murray is in the midst of one of his best clay runs via Munich and Madrid, the Briton has had to cope with some dreadful scheduling along the way.

First, a washed-out Munich forced double duty at the end of the week, followed by a three-set thriller of a final. Then he found himself playing in the early hours of the morning a day later in Madrid.

The Briton is also in a tough quarter that opens against the dangerous Jeremy Chardy, who beat Federer here in his first match last year. Other seeds are Jo-Wilfried Tsonga followed by either David Ferrer or Marin Cilic—though the latter pair have unseeded dangers Richard Gasquet, winner in Estoril, Bucharest champion Guillermo Garcia-Lopez, and Alexandr Dolgopolov in the mix.

Djokovic opens against Nicolas Almagro, whose entire trophy cupboard of 12 comes from clay, and who is returning to some form after lengthy injury problems.

More clay aficionados, such as Marcel Granollers and the fast-improving Diego Schwartzman, are also here with No14 seed Roberto Bautista Agut.

If Murray does not have the stamina to go deep, Ferrer is a strong outside bet: and he, along with Stan Wawrinka, are the only other players in the field to have reached a Rome final.

So it is Federer, searching to rediscover the form that took him to the Istanbul title, who may find himself thwarted ahead of the final by his oldest and toughest rival, Nadal, in a potential semi-final. What’s more, Federer has come to Rome courtesy of an opening loss in Madrid—and a fortnight after a second-round loss in Monte-Carlo.

He opens against either Wild Card Paolo Lorenzi or fellow Istanbul finalist, Pablo Cuevas, who Federer beat 7-6(11) in a thrilling second-set conclusion.

His first seed could be Kevin Anderson, though the stylish Philipp Kohlschrieber played wonderful tennis for three hours against Murray in the Munich final.

Federer’s quarter-final brings the in-form Berdych, who can count wins over Federer among his past achievements. The alternative is Grigor Dimitrov, a quarter-finalist in Monte-Carlo and Madrid.

It is hard to see beyond Nadal in the other bottom quarter, who opens against either Adrian Mannarino or a qualifier, but then could face John Isner—who has pushed Nadal hard both at Roland Garros in 2011 and Monte-Carlo last month. His quarter-final promises Wawrinka, but the Swiss has been in fluctuating form this spring, and with Gilles Simon, Simone Bolelli and Dominic Thiem in this segment, Nadal could find a different name in the quarters.