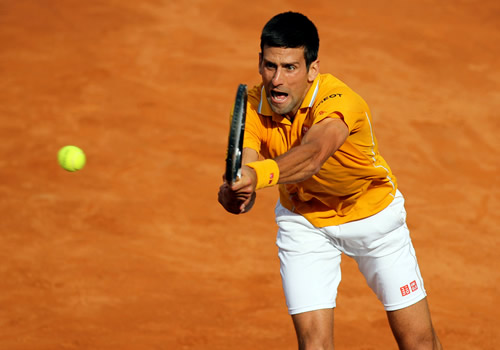 The climax of the glamorous Rome Masters might feature the top two men in the world, but for only the second time in a decade, and the first time in seven years, the final would not include the man who has dominated this tournament like no other.

But when it comes to the jewels in the ATP tour, its Masters events, the message has been clear: these elite level tournaments have belonged to the ‘big four’ for the last five years, with all but four of the last 47 titles going to Djokovic, Federer, Nadal or Andy Murray.

However, two of the players to have claimed one of those four other crowns happened to be Ferrer and Wawrinka: the former also a French Open finalist, the latter that rare thing in the ‘big four’ era, a Grand Slam champion.

Both had won their first professional titles on clay, too, and both were proving that they continued to improve with age: Ferrer is 32 and Wawrinka 30.

But could either man snatch this latest Masters crown from Djokovic and Federer? It looked a big ask on both fronts.

For Ferrer, who had not beaten Djokovic in their last eight matches, the task looked particularly challenging. If there was a glimmer of light, it was that they had met here in the quarters last year, and Ferrer won the first set, 7-5, before the eventual champion advanced. But if the 2014 season had been outstanding for Djokovic, 2015 was already looking just as hot.

The Serb was currently on a 20-match winning streak, had become the first man to win the first three Masters of the year—Indian Wells, Miami and Monte-Carlo—and had beaten every other man in the top 10 this year, including Ferrer in Miami. He also won a record fifth Australian Open at the start of the year, and had notched up his 150th clay-court win in the first round in Rome.

As for Djokovic’s record in the Eternal City, perhaps only Nadal could boast better. Never, in nine visits to the tournament, had he fallen short of the quarter-finals, and he had won three titles from five finals.

So at home is he in Rome, indeed, that Djokovic speaks Italian almost like a native: He has the city in the palm of his hand, by whatever measure.

So Ferrer was up against it, even though his own clay credentials were outstanding: a previous finalist at Roland Garros, Rome and Monte-Carlo, plus 12 clay titles and 299 clay match-wins.

But try as he might, win No300 would remain just out of reach of the fighter par excellence from Spain.

Ferrer began strongly with a love hold of serve, and continued to play aggressively—clearly his tactical game plan—to take Djokovic to deuce. But the Serb held, only to turn his aggressive and precise ball-striking on Ferrer to break in the third game.

The scoreline belied the intensity of many of the rallies, as both pounded the court in pursuit of deep and wide angled placement, but Djokovic seemed to have all the answers—speed, variety and a killer drop-shot—to resist another assault in the fourth game.

Ferrer stayed in touch with Djokovic, and lifted his level and work-rate to draw a backhand error as Djokovic served for the set. The Spaniard hit a forehand just long on break point, but forced three deuces. However, the Djokovic serving rose to the occasion, he twice aced, and closed out the set, 6-4, with another big serve.

Djokovic had made more winners than Ferrer, but also more errors, and they were separated by only one point.

The second set was just as closely fought. Ferrer saved a break point in the first game, and even a determination as strong as his must have been tested by a couple of touches of brilliance from Djokovic at 0-30 down in the second game. Ferrer chased down a drop shot for a deft angled drop reply, but Djokovic lifted a lob over the 5ft 9in Spaniard onto the baseline.

And so the cat-and-mouse tussle went on, but Djokovic became increasingly distracted by some pits in the clay’s surface, and Ferrer took advantage of a spate of errors to earn another break chance in the sixth game—in fact, two break chances. But Djokovic refocused, held and, in a lesson in how to time a strike, pounced on a wayward service game from Ferrer at 4-4 to break. It was then the work of a moment to serve out set and match, 6-4.

So Djokovic will contest a remarkable fourth title in a sixth final in Rome. He is unbeaten since losing to Federer in Dubai almost 11 weeks ago, and should he go on to win this title, in an unprecedented four-in-a-row run, he will overtake the Swiss in the catalogue of Masters titles. Both currently stand at 23, four behind Nadal.

However, Djokovic also has his eye on a bigger prize. He has made no secret of his desire to win his first French Open to complete his Majors portfolio, and it would take a brave person to bet against him doing just that.