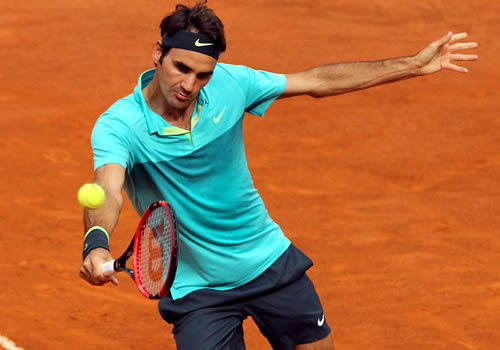 As far as it is possible in a record-breaking and record-making career such as Roger Federer’s, Rome is finding out just how low-profile the world No2 can be when he puts his mind to it.

And it’s clear that, right now, low-profile is how he wants it.

He was never a ‘gimme’ for the Rome Masters in the first place, choosing to play back-to-back clay tournaments through Monte-Carlo, Istanbul and Madrid, to see where that took him. In the case of the first and the last stops, it took him out of the reckoning sooner than expected—one win in Monte-Carlo, none in Madrid.

So the road to Roland Garros took a detour to Rome, but not before Federer had spent the maximum possible time back in Switzerland with his burgeoning family. He arrived at the Foro Italico almost unnoticed Monday, did no pre-tournament press—or the usual sponsor and social jollies—and played his first match Wednesday.

Not that expectations of a deep run here seem to have been his primary focus. Like many other with French Open ambitions, he wants to get his preparation just right after the rather different conditions of Madrid.

Once he did meet the press, an unusually swift 10 minutes after his opening-round win against world No23 Pablo Cuevas, he was still keeping things low-key and downplaying his chances in Rome. Yes, he thought he could win, but he did not expect to.

When asked if he finally thought he could win the elusive Italian title, he replied—with just a hint of sarcasm: “Well I ‘finally’ always thought that I had a good chance over the years, this is not the first year.” It is, indeed, his 15th time in the draw.

“I know I’m not the favourite like maybe I was in other years, but who cares, really? I’m happy I won my first match, especially after last week, and last year here—both matches I lost with match points.”

After his second match, against the tall, big-serving No15 seed Kevin Anderson, Federer looked just as comfortable, give or take a brief detour when serving for the second set with two breaks, 5-2. Twice Anderson broke back—only for Federer to regroup, break again, and this time serve it out, 7-5.

Again he was quick to press, sat down with a resigned sigh, and talked about adjusting to the new conditions—day from night, clay expert to hard-court expert, all-courter to power-striker—as though it was the easiest thing in the world, except that tactical flexibility can determine win or loss in this physically demanding, mentally challenging, one-on-one sport.

“I adjusted. I just had to react differently today than yesterday’s match. It was difficult because it’s Kevin, he has an amazing serve, there’s not much you can do on the return games. So first thing is not to get frustrated. Thankfully I got a good start in both sets and from that time on I could relax almost, and focus on my own serving game.” 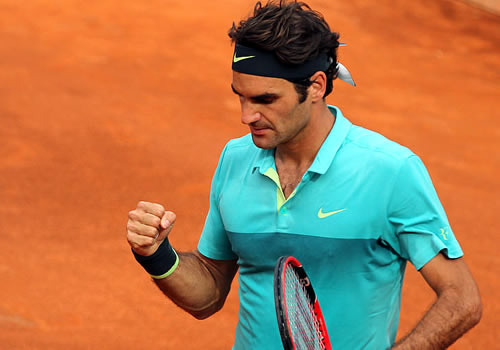 So two down, three to go if he was to add this missing title to his resume—and what a three. Seven of the eight top seeds were contesting the quarter-finals, with only Andy Murray absent due to his withdrawal: The eighth man who would take on David Ferrer was the No20 ranked talent from Belgium, David Goffin.

What’s more, the big Czech was proving yet again to be one of the most consistent men on the tour. This year, he has reached at least the semi-finals of seven of his eight tournaments—though the only exception was a quarter-final loss at Indian Wells to Federer.

Despite a gruelling match against Fabio Fognini the afternoon before, the super-fit Berdych opened strongly with two love holds of serve, and then unloaded a sequence of heavy shots from the baseline at each wing to break for a 3-2 lead.

Inexplicably, though, Berdych then made several errors, including a double fault to bring up break-back points, and Federer took full advantage: 3-3. Berdych, his concentration apparently lost, could not even take advantage of a poor first serve percentage from Federer, who held to love and broke again courtesy of two forehand errors from the Czech.

Berdych had more than enough chance to break back, though, reaching 0-40 as Federer served for the set. But now was the time for the Swiss to find clutch serving and take advantage of his opponent’s struggles on the slippery grit with some wide kicking deliveries. Federer rubbed salt into the wound with a framed drop shot winner, and held for the set, 6-3.

The second set was marked by edginess on both sides of the net, not in the tennis but the moods. Berdych was unhappy that the court was not watered between sets, as is the norm, as that kept the surface slippery, and a gusting wind also began to throw up dust.

Then there were disruptions such as a camera lens dropping onto court, a poor call on a Federer serve—compounded by a poor call from the umpire—but the drama was punctuated by some stunning points. Berdych lived with all the distractions until Federer went for the kill with a beauty of a backhand flick down the line for break point in the seventh game. Another backhand winner, and the Swiss made the decisive break. He eased to the win with one last break, 6-3, in just 66 minutes.

Even Federer’s salute to the crowd was subdued—almost forgotten entirely—and he was afterwards quietly matter-of-fact about his performance: “From the baseline I was playing very well.

“My serve was not quite there in the beginning… he was able to take advantage of that and break early. I felt good on the return, moving well. As it went on, I think I got into the match better and better. The wind picked up in the second set, that’s why I think Tomas didn’t play so well anymore and I was able to get the job done.”

Federer would probably have regarded a semi run in Rome as a success after so late an arrival with such modest success on clay thus far in 2015. Indeed he told TennisTV: “I think this tournament has been a success already, whatever happens now it’s good,” adding for good measure: “I think to say I’m peaking is a bit of an exaggeration.”

But should he reach the final, he is sure to be more than happy, because it would mean victory over the man who denied him the Monte-Carlo title last year, Stan Wawrinka, or over his nemesis so often in title matches on the red stuff, Nadal.

Until tomorrow, though, he will head off into the sunset with his mates Severin Luthi and Michael Lammer, probably taking another photo or two, having a quiet dinner, and going through the same old pre-match routines. And it would seem he is enjoying every quiet minute of it.

While Federer and Berdych were getting under way on Centre Court, former Rome finalist Ferrer was putting the finishing touches to a tough win over Goffin, 6-2, 4-6, 6-3.

He next has the unenviable task of playing defending champion and world No1, Novak Djokovic, who beat Kei Nishikori 6-3, 3-6, 6-1, in an hour and three-quarters. It was Djokovic’s third three-set win in Rome.