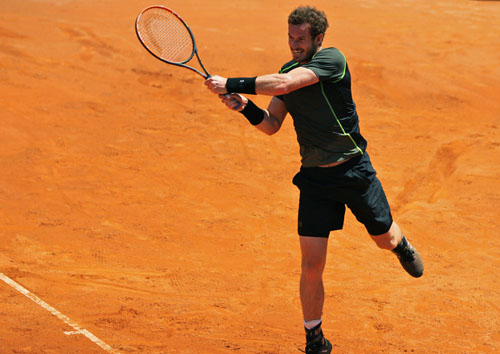 He may have left it until the last moment, but Andy Murray’s decision to play in his 10th Rome Masters ensured that the Wednesday schedule at the Foro Italico would get off to a high-quality start: midday, on a baking Centre Court.

And he brought with him his first two titles on clay, a 9-0 winning streak, and his 10th Masters title. Factor in marriage just a month ago, a blooming coach in Amelie Mauresmo—with a second new coach in the wings in experienced Swede Jonas Bjorkman—and it is perhaps no surprise that Murray has looked confident, contented and still full of running.

He has been keen to give credit to his team for his outstanding performance on the red stuff this spring:

“I feel a lot healthier than I did the last couple of years on clay, so I have to thank my team for that… The way I trained and prepared for this season is different from what I’ve done before, and the results have been good.”

That is an understatement.

After beating Philipp Kohlschreiber in a marathon Monday final in Munich, he headed straight to Madrid, where he was again taken to three sets in his first match by Kohlschreiber, but thereafter he did not lose a set, despite playing No6 seed Milos Raonic, No5 seed Kei Nishikori and finally the defending champion, the king of clay himself, Rafael Nadal in the final.

So from having failed to reach even a clay final in his illustrious career, he won two titles in the space of six days.

It is easy to forget that Murray has twice reached the semis and twice more the quarters of the French Open, but that clay prowess has only translated into one semi run in Rome.

Perhaps it was ambitious to hope to equal that run after the last week or so, especially as Murray played world No38 Jeremy Chardy in his opener here. Chardy had beaten Murray only once in their six meetings, but they had never played on clay, and Murray was no doubt fully aware that the Frenchman had beaten Federer in the Swiss star’s opening match here last year.

And although Chardy had lost in the first round of his last two tournaments, in Estoril and Madrid, he came out hitting big, just as he did last year, firing forehands down the line at will.

Murray found himself in trouble serving at 2-3 and facing two break points, but reeled off five straight points, holding with an ace.

The difference in quality and ranking between the two men came into sharp focus in the next game, where Chardy also found himself at 15-40, courtesy of a double fault, but Murray did not let the chance slip away and broke to 30. A couple of strong service holds later and he was 6-4 up after 44 minutes.

The second set unfolded along similar lines, but Murray was playing strong, forward-moving tennis combined with some fine drops and sliced backhands to keep Chardy at bay. Sure enough, break points came, this time in the fifth game, after Murray played a backhand down-the-line drive followed by a chasing angled forehand winner. He converted with a backhand winner.

Murray’s serving level rose with his lead, now up to 85 percent for the set, and he broke again to finish off the match, 6-3, in an hour and 24 minutes.

This was another fine performance from Murray, one in which he made 19 winners to just 10 errors, but things will not get any easier. Once again, he will have to play back-to-back days for as long as he stays in the tournament.

His next match throws in the considerable talent of either Jo-Wilfried Tsonga or David Goffin, and thereafter the clay mastery of either David Ferrer or the No28 ranked Guillermo Garcia-Lopez, who has been discovering great form in his 31st year to win two titles, including on clay in Bucharest.

Murray’s prime concern ahead of Rome was to get time against strong competition in conditions that are similar to the clay climax in Paris in a fortnight. And while he is certainly getting that, he is also steadily working himself into the reckoning to at least equal last year’s semi run at the French Open.

On his prospects at the upcoming Grand Slam, Murray added:

“It’s not impossible. Whereas maybe in the last few years, even though I’ve played some good tennis in Paris, I didn’t feel like I was healthy enough, or played enough matches, or had enough big wins against top players to believe I could do it.

“Maybe this year will be different, I’ll go thinking there’s a chance but certainly it would be a massive turn around. If I play well, then I know I have the chance to go far in the tournament. But we’ll see in a few weeks.”