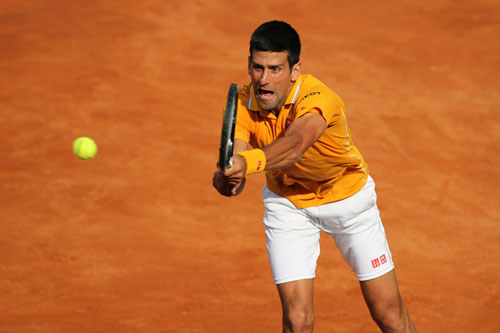 After an outstanding start to 2015, winning the Australian Open and the first three Masters tournaments of the year, the world No1 took a much-needed break after lifting the Monte-Carlo trophy by opting out of last week’s Madrid Masters.

Novak Djokovic has returned to defend his Rome title refreshed both in mind and body, and got just the work-out he needed to play himself back into match-sharpness with a tough three-set battle against the considerable clay strength of Nicolas Almagro.

Their contest had the look of a straight-forward, straight-sets win for Djokovic when he took the first set, 6-1, resisted a break chance to Almagro to reach a tie-break, where he led 5-2. But Almagro unleashed a crowd-thrilling run of backhand winners and big serves to take five points in a row for the set, 6-7(5).

It was level peggings in the third set until the aggressive Almagro raced too enthusiastically for a wide forehand retrieval and crashed into the court’s surrounds. He hobbled to his chair, rubbing his knee, but quickly returned to play, and levelled the set at 3-3.

However, Djokovic’s precision hitting to the baseline corners eventually proved too much, and he got the required break to serve out the match, 6-3.

It had taken a demanding two hours, but that did not concern the defending champion:

“At the end of the day it’s a win after three weeks with no official match. In the important moments today, I did feel a little bit uncomfortable. Maybe that’s due to a lack of competitive play in the past couple of weeks. But I won against a quality player who knows how to play on the big stage—a former top-10 player.

“All in all, it was a great test. Before coming to the court, I was aware he was going to present a great challenge.”

Djokovic now has a day off as the rest of his biggest rivals play their own first matches, and that suits him just fine in what looks to be a very smart and carefully planned schedule with one particular end-goal in mind: the only missing Grand Slam from his resume, the French Open.

He explained why he needed a fortnight off—and it was no more than that, since Djokovic was in Rome early practising before the other top seeds arrived here.

“I needed to take some time off, because I have played a lot of matches. It has been one of the best starts to the season of my life. But it took a lot out of me, mostly mentally. So I needed to really take it off, recharge my batteries and spend some time at home, watch the development of my baby—it was beautiful, but it probably did affect my overall feeling on the court today, especially in the tough moments. Hopefully the day off tomorrow will allow me to spend some more time on the court, working to get better in the next one.”

This first Rome match takes his winning streak to 18 matches and his 30th in the Eternal City, where he has never fallen short of the quarter-finals and has gone all the way to the title three times.

He will next play either No14 seed Roberto Bautista Agut or Thomaz Bellucci.

Also in Djokovic’s half, No12 seed Jo-Wilfried Tsonga, playing in only his fifth tournament since injury at the end of last year, beat Sam Querrey 7-6(6), 6-0 in the first round, and will next play David Goffin.

The No7 seed David Ferrer, a former finalist here, scored a good win over the in-form Richard Gasquet, 6-4, 7-5, and will next meet either Guillermo Garcia-Lopez or Alexandr Dolgopolov.

Three second-round matches were decided in the bottom half of the draw. No8 seed Stan Wawrinka had a fight on his hands against Juan Monaco but came through, 4-6, 6-3, 6-2. No6 seed Tomas Berdych beat Italian wild card Matteo Donati, 6-2, 6-4, and No15 Kevin Anderson advanced after Philipp Kohlschreiber retired at 0-3 down in the first set.

Anderson could face Roger Federer in the third round if the second seed wins his opener against fellow Istanbul finalist, Pablo Cuevas.