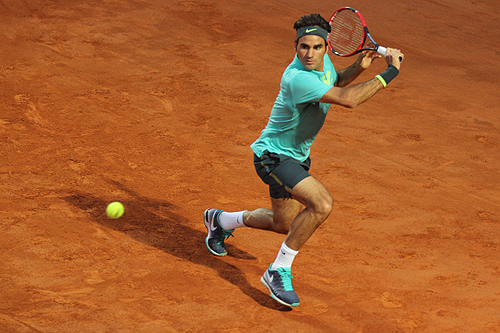 Roger Federer’s clay swing this year has been a little out of the ordinary.

First he bypassed the Miami Masters to give himself plenty of time to rest, practise and ready himself for the season on the surface that has reaped plenty of success, yet rather less success than other surfaces. For although he has won the French Open once and the Madrid Masters a couple of times since it moved to clay, he has never won the Rome or the Monte Carlo Masters. The fly in the ointment has, as often as not, been arch-rival Rafael Nadal.

So Federer announced that he would return to the fray for a packed clay swing that included Monte Carlo and Madrid but that also threw in a brand new 250 in Istanbul—with Rome added on if he needed more matches on clay before the French Open.

But although Federer passed the 200 mark in clay wins along the way, those wins were not as plentiful as planned. He lost in his second match in Monaco and in his first in Madrid, and while he won the Istanbul trophy in between, it was far from plain sailing considering that he did not played a man ranked in the top 20.

So Federer’s road did indeed lead to Rome, but not with the bells and whistles that usually accompany his arrival in town. He came almost unheralded, and later even than in Madrid. And once here, the schedule was different: He was not about to jump through the usual hoops of pre-tournament press.

But then, as Andy Murray pointed out when asked about opting into or out of tennis’s blockbuster events:

“[Roger’s] been on the tour for an extremely long time and one reason is he’s been exceptional at managing his schedule and his body. He’s now 33 and still one of the best players in the world. So I think he’s earned the right to decide which weeks he plays and which he doesn’t. He’s played enough tennis in his career to know what he needs.”

And it became clear that what Federer needs this time around is to recalibrate the scales between tennis and family.

Over the years, the tennis tour has become familiar with what Federer himself has called ‘the travelling circus’ of his family. He and wife Mirka are parents to twin daughters—now almost six years old—and to one-year-old twin sons, but with very Swiss precision, the couple has managed to travel the globe with an entourage of nannies, sometimes parents, and always with coach Severin Luthi, and his physio team.

But during this out-of-the-ordinary clay season, there has also been a shift on the home front. Rather than Federer’s family following where he has led, the family has stayed put and Federer has gravitated to them.

I wondered whether this was, quite simply, a practical solution to the increasing demands of growing children, but as he warmed to the theme, it became clear that the root cause of the changes is time: there is not enough of it to go round.

“Well, this is an easy trip for me to do by myself. Whereas if I come with the family, the set-ups in Rome and Madrid always seem hard for us. I don’t know why. Maybe it’s too intense, the bigger cities, the hotels, I don’t know what. It just seems to be so much easier for them to stay at home right now, and be in Switzerland for a longer period.

“Because we did all of Australia, LA, Dubai—it’s been a lot of travelling. And we’ve got a lot of things happening at home, so we are just happy with the way it is right now.

“They did come to Monaco with me for 10 days, which was great, and from this moment forward they will be with me everywhere for the [rest of the year], so from that standpoint, this now is just a one-off, two-off, three-off in a row, because we just find it easier.

“[But] we call each other five times a day, just to make sure everything’s good at home, everything’s good with me. And arriving late at two events also helps soften the blow a little bit for me being away from the family.”

But what of Rome? Would his relative lack of match-play in Madrid, and now lack of practice time since arriving here on Monday, bring another truncated run at a big tournament?

One thing that was familiar was Federer’s first opponent, the No24-ranked Pablo Cuevas, who Federer met for the first time just three weeks ago when they contested the Istanbul title. That was a high-quality, high-octane match, and Federer got the upper hand, 7-6(11), in a thrilling second-set conclusion. But there was no doubting Cuevas’s rising trajectory after his return from knee injury last year: He had also won the Sao Paulo title before reaching the Istanbul final.

And the experience of that previous meeting was no doubt behind the strong tennis and confident tactics with which Cuevas came to court. If Federer had any rust from lack of court time, Cuevas threatened to take advantage.

They remained on level terms through the first seven games, when Federer earned the first, and only, break point chance of the set. Two deuces later and Cuevas had held and they headed to a tie-break.

Cuevas took the first point against Federer’s serve, too, but the Swiss was looking sharper by the minute, and ran to 4-1. Still Cuevas came up with some fine baseline strikes and all-court skill on both drop-shots and net points. He closed to 3-4, but then Federer put on another surge and closed out the set, 7-6(3) with a show-stopper rally won by a chasing squash shot forehand retrieval that just beat Cuevas at the net.

The serving had been very fine: Federer dropped only two points from 22 first serves, Cuevas five from 24. But in the second set, the Swiss would drop only four points on serve altogether, and Cuevas could not match that.

Even so, Federer became uncharacteristically edgy after failing to convert two break points in the first game, and then he launched a ball high into the stands in frustration. He was rewarded with a code violation, but finally got his break at to go 3-2. Cuevas fought to the bitter end, but Federer served out with ease, 6-4, after 81 minutes.

So some things don’t change, but Federer was quick to point out that last year, the result was rather different:
“I know I’m not the favourite like maybe I was in other years, but who cares? I’m happy I won my first-round match: That was my focus, especially after last week, and last year here—both matches I lost after match points.”

Federer has been a finalist in Rome three times, and it is some stretch to see him going one step further this time around. He has the big South African No15 seed Kevin Anderson in the next round, followed by either Tomas Berdych or Fabio Fognini. If he makes it to the semis, he could face the spectre of Nadal once again—with defending champion and world No1 Novak Djokovic looming in the final.

But then, as he admitted when asked the outright question, he would rather win Roland Garros: “One more time. Just because.”

And win or lose, the family will be in attendance for that one—just like old times.