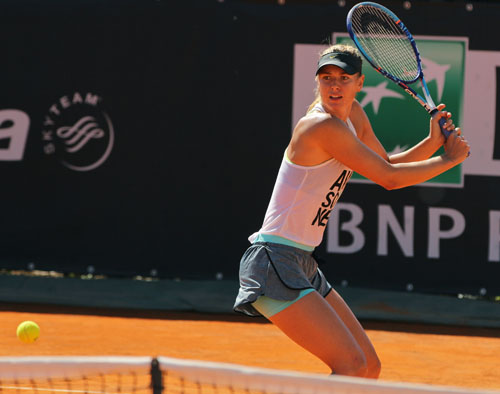 As Serena Williams begins her campaign at the Foro Italico this week, she is the woman to beat, the woman who will have topped the rankings for a continuous 116 weeks by the time the tour reaches its clay climax at Roland Garros, and she is the three-time champion in Rome with a 14-match streak in the Italian capital.

But while she stands astride the women’s rankings and the tour with a 24-1 winning record in 2015, she arrived here after seeing the end of a remarkable string of streaks: a 19-match run in Madrid ended in the semi-finals, along with her unbroken run this year and a 50-match run at the prestigious Premier Mandatory level.

So while she may have the Australian Open, Indian Wells and Miami titles, but she would dearly love to bounce back from her Madrid exit with her third Rome title in a row. And she sounded ready for challenge:

“I’m feeling better than I was last week. Just good to get some matches under my belt on the clay—just a couple more [clay] tournaments left so I’ve got to start lifting my level. [But] as I get further along, especially on this surface, it’s so important for me to stay positive and not change my game too much. Obviously I want to work on consistency, but I don’t want a complete 360 on my game.”

But just as in Madrid, Rome has some formidable challenges to her ambitions. Top of the pile might, a couple of a weeks ago, have been Maria Sharapova.

After all, the world No3 has, in recent years, made a case for being the queen of clay. Twice a champion in Rome and twice a champion at Roland Garros, she has won 57 of her last 63 matches on clay, and 16 of her last 17 in Rome. Should she claim her third Rome title, she would draw level with Williams as overall leader in clay titles, 11 of them.

But there lies her problem. Sharapova has not beaten Williams in a decade, and never on clay—and in falling at the semi stage in Madrid, Sharapova failed to regain the No2 ranking. As a result, she finds herself in Williams half in the Rome draw.

Recently, Sharapova has arrived in Rome already with a clay title to her name—three Stuttgart titles on the bounce—but this year is different. Not that she seemed fazed. 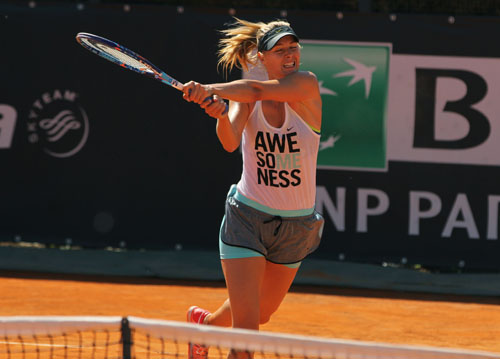 “Obviously sitting in this chair last year, I had won two titles on clay, but that’s why I never like compare years because every situation is different.

“I’d say in the last two or three years, this has been a really successful part of the season for me, but I think this year’s preparation has been definitely a little bit different. It started a bit later than it has in the past so coming into Madrid was kind of the beginning stage of it all.

“This is my last tournament of clay court preparation before the French Open, so of course the main goal, as anyone else, is to play as many matches as I can here and to do as well as I can. I’d love to win this tournament one more time.”

But aside from a potential run-in with Williams in the semis, she could face a tough quarter-final, too. The unseeded Victoria Azarenka, who lost to Williams in the 2013 final, has been making her presence felt this year after slipping down the rankings with a foot injury.

She had match points against Williams in Madrid last week, too, but is in a bunched-up section with Caroline Wozniacki and Angelique Kerber.

However it is in the bottom half of the draw that the latest contender for the Rome crown can be found. Not No2 Simona Halep—though last year’s French Open finalist is a serious contender—but the No4 seed, Petra Kvitova, who went on a stunning run through Madrid to win the title there for the second time. And she did not drop a set in the last four of her six matches, even against Williams in the semis.

It was something of a timely turn in fortunes for the reigning Wimbledon champion. She had won only three matches since the Australian Open and pulled out of Indian Wells and Miami citing fatigue. These have been worrying times for her army of supporters, but it was the old relaxed and happy Kvitova who talked freely in Rome of her recent troubles and her optimism for the coming months.

First her feelings after her return to form in Madrid:

“I was a bit surprised after the break, not playing two tournaments, I was worried how I might react. I played Fed Cup, which was OK, and Stuttgart, which was bad, and at Madrid the first [matches] were very difficult. I wanted to focus most of the time on going to Madrid and playing tennis and trying to be Petra again.”

She went on to dampen some of the expectations now surrounding her in Rome and Roland Garros—and the style of her winning in Madrid, playing fast, powerful, but deft tennis, has catapulted her into the strong odds.

“Actually I’m not thinking about that. My Madrid title is still very fresh and I didn’t get to enjoy it that much, because another big clay tournament [is coming up] and then a big Grand Slam. But I’m glad that I played six big matches and beat the No1 Serena for the first time. It’s a great effort for myself. It’s nice to win a big tournament but I think it gave me confidence that I can play on the clay and play good players. That’s one of the most important things.”

But what of that break, that exhaustion, that made her take the unusual step of missing two of the tour’s biggest events?

“Yes, I was worried a lot actually. Because I know how I felt before and I just didn’t want to have these feelings again… I didn’t feel very comfortable in the moment…

“I don’t think it was only just one side, mentally or physically. I think everything is connected in tennis. I was just tired.”

She does, it is safe to say, look like ‘Petra again’, and in Rome she has avoided not just Williams, Sharapova and Azarenka in her half but Halep in her quarter. She opens against wild card Karin Knapp and will certainly face a challenge in her projected third-round against two-time former Rome champion, Jelena Jankovic. However it is the Serb’s first tournament since a foot injury forced her out of Charleston, and she faces a tricky opener against Camila Giorgi.

Further into the draw, Kvitova could meet No6 seed Eugenie Bouchard, who has not won a match since Indian Wells.