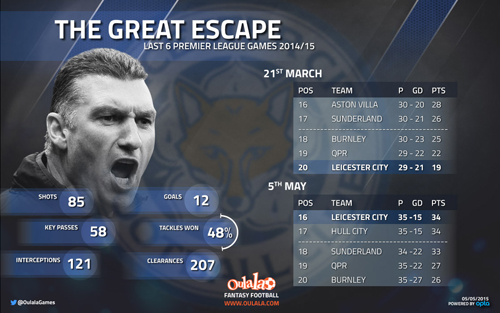 Bottom of the Premier League at Christmas is never a good sign.

Leicester City now sit a point clear of relegation with three games to go. A miraculous recovery and historically, what would go down as the greatest escape ever should they finish the job off in the final few weeks.

Let’s remember, no Premier League club has ever survived with less than 20 points after 29 games.

The phenomenal upturn in form has Leicester currently sitting third behind only Arsenal and Chelsea in the Premier League form table.

A closer look at Leicester’s stats, when compared to the rest of the Premier League, shows just how effective they’ve been in every key area in recent weeks.

From an attacking point of view the Foxes are dominating the entire Premier League, they sit joint top of the table for goals scored with Manchester City after netting 12 in their last six games. That’s 30.8 per cent of their total goals for the whole season. The 85 shots amassed by the team has resulted in a 14 per cent strike-rate.

Creatively, the 58 key passes produced by Leicester puts them seventh overall in this particular category.

As far as defending goes, Leicester have dominated the Premier League further. A 48 per cent tackle success rate puts them third for tackling. 121 interceptions has them top overall, while 207 clearances puts them seventh in that specific area.

Chelsea manager Jose Mourinho recently backed the Foxes to beat relegation and survive. With an attractive final three games, at home to Southampton and QPR and an away trip to Sunderland, who’d argue against it?

Jamie Carragher: Why I’ve been so impressed by Arsenal