These figures show why Man United must qualify for Champions League

Manchester United have the third-most valuable team in world football, according to new data 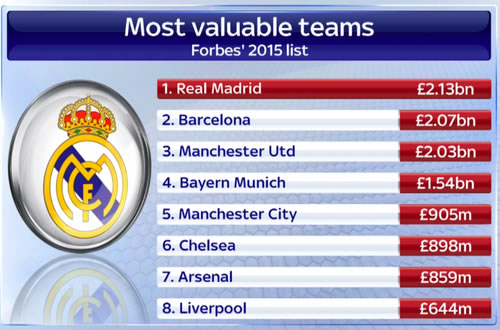 Manchester United have the third most valuable team in the world Photo: Sky Sports News HQ/Twitter

Manchester United have made no secret of their desire to build a team capable of qualifying for the Champions League since Sir Alex Ferguson’ retirement.

The Red Devils have splashed huge transfer fees on a number of players since the Scot’s retirement in the summer of 2013.

United have spent so much in recent months that Forbes now places the Red Devils as third on the list of the most valuable football teams in the world, just behind Real Madrid and Barcelona.

It is estimated that the United side is worth around £2.03bn, with Real Madrid topping the table at £2.13bn.

Manchester City are the second-most valuable Premier League side, but are worth less than half of United’s team at £905m.