These stats show just how good Arsenal have been since February 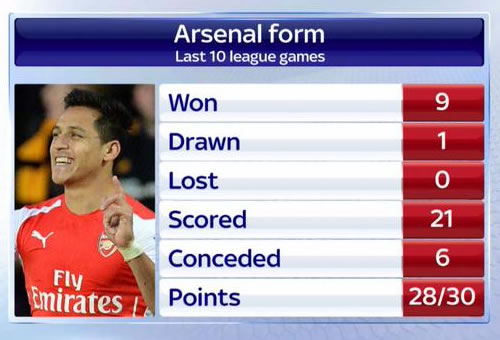 Arsenal have been in fine form of late Photo: Sky Sports News HQ/Twitter

It is no secret that Arsenal are one of Europe’s most in-form teams at the moment.

The Gunners took a giant stride towards qualification for next season’s Champions League by beating Hull City 3-1 at the KC Stadium on Monday night thanks to goals from Alexis Sanchez and Aaron Ramsey.

Arsene Wenger’s men have now won nine of their last 10 Premier League games since their defeat by Tottenham at White Hart Lane back on 7 February.

The Gunners have only conceded six goals in that run and have only dropped points to newly-crowned champions Chelsea.

The north London side have also managed to score 21 goals on their way to taking 28 points from a possible 30.

Arsenal, who will finish as runners-up to Chelsea if they win their remaining four games, take on Aston Villa in the FA Cup final later this month.

Wenger’s side take on Swansea City in their next Premier League game on Monday.

Photo: Chelsea’s Cesc Fabregas snaps selfie with his ‘date for the day’