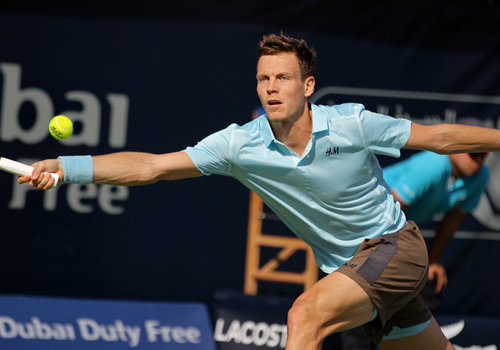 Tomas Berdych is up to No4 in the world Photo: Marianne Bevis

Tomas Berdych, who has more than 12 years on the tour and turns 30 this September, has broken into the top four of the ATP rankings for the first time in his career.

It is a just reward for one of the most consistently high-performing players in tennis, a man who has not been outside the top 10 since he reached the Wimbledon final in 2010 nor failed to reach the World Tour Finals. For most of that time, indeed, the 6ft 5in Czech has been ranked between Nos 5 and 7, slipping only briefly this spring after failing to defend his Rotterdam title.

But such has been the constant high standard of Berdych’s results that he has edged back into, and now beyond, his previous high, following yet another quarter-final run at last week’s Rome Masters.

‘Yet another’ being the operative phrase. He has reached at least the quarter-finals of all nine tournaments this year, advancing to the semis in no fewer than seven of them and the finals of three: Doha, Rotterdam and Monte Carlo.

Last year, he reached the quarter-finals of three out of the four Majors, including his first semi-final in Australia—and he beat Rafael Nadal this year for the first time in 17 consecutive meetings in reaching the semis in Melbourne again.

In fact he has yet to be beaten by a player outside the top 10 this year, a current 30-0 run. And the only man with more match-wins than Berdych’s 32 is the world No1 Novak Djokovic.

Yet he is not a man to rest on his laurels. After reaching his 500th match-win milestone in Dubai he joked: “I just need to really make sure that I keep my body fresh and let’s make another 500! Let’s try to chase Roger now!” He referred to Roger Federer, who had just passed the 1,000 mark.

Tongue in cheek the comment might have been—and his humour has won a growing following in social media as well as on court—but there is no denying that he believes there is more to come.

During the off-season over Christmas, Berdych recruited new coach Dani Vallverdu in his latest push for a fresh edge.

“I felt that I got to a certain level where… I needed something different, that I needed to get a change if I wanted to get better. It’s nice to be four or five years in a solid position in the top 10, but the years are coming, and this is one of the last times if I really want to change something, if I want to aim for bigger results. And that’s why I decided.”

The rewards seemed to come straight away, with two finals sandwiching his semi finish in Australia, though he talked of that with a mix of disappointment and optimism.

“Of course still disappointed to lose the semi-final but I can still see more clearly what the things are that I need to keep improving, where I need to put my game for the future. But it was a good start… everything was working how I needed, but I just need to keep doing that a little bit longer.

“To say it is quite easy, but to execute is a little bit more difficult. But it’s good to have a plan and goals and try to chase them.”

One goal was surely to break into the top four, and he has done that with perfect timing for the seedings of the French Open.

At Roland Garros, he has quarter-final points to defend and, with Nadal ranked at No7, he will hope he is not the one to draw the nine-time champion in the last eight.

For if there is a down side to tennis success, that is it: You become the man with target on your back, the one that lesser-ranked players want to beat. Berdych has the charismatic Kei Nishikori breathing down his neck at No5, a man who just a month ago also made his debut in that No4 spot.

At Nos 8 and 9 are two more men, David Ferrer and Stan Wawrinka, who have tasted top-three status and will, in the absence of Milos Raonic, also be seeded as potential quarter-finalists.

Possible opposition in the fourth round are US Open champion Marin Cilic, and a clutch of former top-eight players jostling to regain that level: Grigor Dimitrov, Gilles Simon, Gael Monfils, Jo-Wilfried Tsonga, and they are closely followed by former top-10 John Isner and a career-high David Goffin at No18.

But Berdych has been there, done that, and survived most of what the tour can throw at him. Roland Garros may pose his toughest Grand Slam questions, but that won’t stop the big man from giving it all he has.

Harlequins are going to be competing at the top, says Roberts